Sonam Kapoor Raises The Fashion Bar High Even During Quarantine 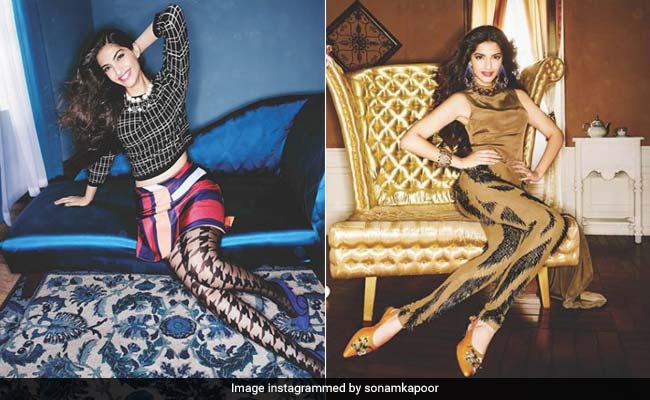 Sonam Kapoor's throwback photoshoot is stealing all the attention

Trust Sonam Kapoor to add a stylish edge to everything, no matter the time or season. It's not without reason that this gorgeous Bollywood actress is known as a style icon. While we are all homebound and staying safe, it definitely shouldn't be an excuse to forget all about style. Even at home, you can always dress up and beat the blues, especially if you call yourself a fashionista. After all, a little vanity never hurts. To get your fashion inspiration this week, you've got to have a look at Sonam Kapoor's series of super glamorous posts on Instagram that adds a whole new meaning to lounging at home. Sonam shared a series of throwbacks where this diva can be seen in various chic looks.

Sonam Kapoor shared a post of her casually sitting on the couch and wrote, "This is me being casual and nonchalant". She can be seen wearing a black and white cropped top with a colour-blocked short skirt. To team up her outfit she chose to go for stockings with abstract designs. With her hair on one side and a charming smile, Sonam left the internet spellbound with her beauty.

This is me being casual and nonchalant. Obviously these are throwback.. please tag the credits guys I don't remember..

In her series of couch fashion, Sonam Kapoor's post in a gold outfit had all our attention. Her outfit featured a sleeveless shiny top and pants with black feature detailing. With chunky jewellery and a pair of embellished shoes, she gave us insights to "how at home shoots used to look like..". We don't know about home shoots but this look can surely turn all the heads in parties.

How at home shoots used to look like.. I also really like this outfit.. remind me who this is by?

Sonam Kapoor posted another picture where she can be seen lying on a bed wearing a chic black dress. She wrote "Pjs in bed? Not me...".

On yet another home photoshoot picture, Sonam was seen wearing a gorgeous red dress with blue pencil heels and taking on a call while lounging on the couch. This is what we all do at home but of course not always in a glamorous way like her. The actress set a vintage vibe with her dress, sheer black gloves and the background.

Neerja actress Sonam Kapoor shared another picture of her golden outfit look on the couch and gave a hilarious touch to the picture by writing, "Quarantine look 2".

Do you know what is Sonam Kapoor's "lounging at home" outfit? It includes a pair of shiny-silver pants with polka dots and a full-sleeved white top by Shehla Khan. Casually lying on a pink couch, her dolled-up look was picture-perfect.

If you are looking for a dose of glam in this gloomy time, follow Sonam Kapoor's style statements.

(Also read: Sonam Kapoor's Childhood Pictures Prove That She Was A Stylish Kid)