10 Of Sonam Kapoor's Magazine Covers That We Absolutely Love!

Sonam Kapoor is a photographers delight. Take a look at her best magazine covers yet! 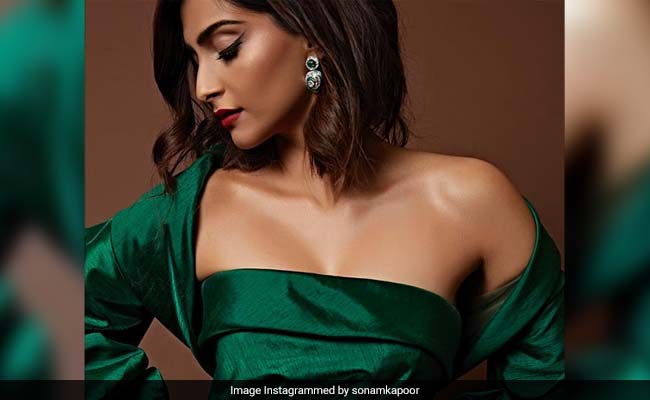 Sonam Kapoor knows how to stun in everything she wears and all the time! Sonam has been a part of some pretty amazing magazine covers, but these are definitely our favourites!

Sonam Kapoor graced the cover of the latest issue of Vogue in which she is every bit a rock star. With smoky brown eyeshadow, kohl-rimmed eyes and nude lips, she made her look do all the talking! Don't miss the dainty necklace and the ring she adorns which is a perfect contrast to the leather jacket.

With that bright red lip, Sonam Kapoor looks like an eternal beauty. Her eye makeup looks on point with subtly blended brown eyeshadow and neatly kohl-rimmed eyes. She even sports lightly contoured cheeks and well-defined eyebrows to give her face a chiselled look.

Namrata Soni has worked her magic on her muse, yet again. Sonam looks easy breezy in that barely there makeup look. She keeps her eyes simple and lets her lip do all the talking. With barely any eyeshadow, Namrata uses a mascara to give definition to Sonam's eyes and completes her makeup with wine toned lips.

4. A Little Bit Of Drama

On the cover of Femina, Namrata Soni goes all out by giving Sonam a deep ruby lip, well-defined eyebrows and brown eyes. She uses shimmery shadow on the inner corners of her eyes and completes her look with centre parted sleek back hair. All dramatic yet so subtle, we are digging this look.

Bollywood's favourite fashionista, Sonam Kapoor, could make a perfectly good beauty icon too! We just can't seem to take our eyes off her - her messy beachy waves and dewy skin make her look so sexy. That gold and brown eye makeup is complementing her eye colour perfectly. And don't miss that ombre coloured lip, redefining sensuous all the way.

Sonam Kapoor in the 2014 issue of Elle looks like she definitely doesn't mind the tagline - "Why She'll Never Shut Up". With all smiles, Sonam looks amazing in that quirky Moschino tube dress. She keeps her makeup rather simple with pale pink lips. But it's her eyebrows that caught all our attention. Gently filled in and well defined, they do give her face some dimension. She wears a subtle skin tone eyeshadow with a messy bun hairstyle, keeping the look just perfect.

Sonam Kapoor on the cover of 2013 Elle Magazine looks out and out edgy. Her makeup compliments her outfit perfectly. Keeping her lipstick minimal, she went all out with her eyes. Well defined crease on her upper eyelids and a smoky shadow effect on her lower, she completed her look with a sleek, pulled back updo.

Hail Namrata Soni! She makes sure each cover of Sonam is better than the best. We love how she experimented with her eyes. She seems to have used a heavy dose of mascara and added a thin line of blue kohl just for that extra oomph. She makes a massive statement by just adding some colours to the eyes. She keeps the rest of the look minimal by wearing nude pink lips and blue nails.

Shot in the picturesque locations of Israel, Sonam looks no less than a fairytale princess. Dressed in all baby pink, she wears a deep maroon toned lip and keeps her eyes subtle with simple kohl and a little mascara.

Sonam Kapoor in this Elle magazine shot looks like she means business. She wears a deep wine lip with bushy eyebrows. Her eyelids have been given depth without attracting too much attention. Her blush gives her cheeks the dimension they need. Wearing Louis Vuitton with Adidas, she complements the outfit by going in for wet sleek hair, pinned up at the top.