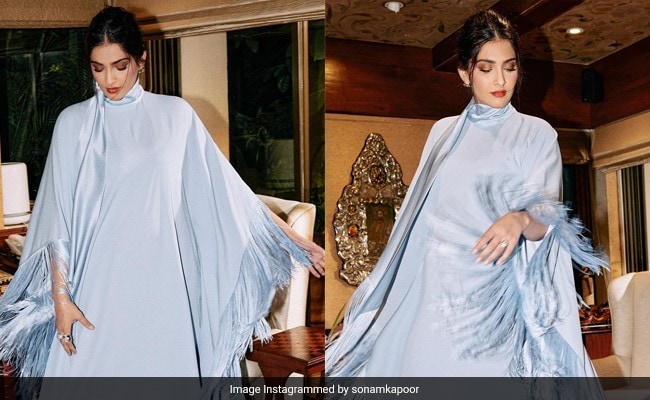 Sonam Kapoor is a diva and no one can match her charisma and style. She often leaves us in awe with her show-stealing outfits. So, what's new now? Sonam is currently busy showcasing different style statements in full swing. She shared pictures wearing another outfit and boy, we are swooning. Sonam wore a stunning ice blue kaftan dress by international designer Taller Marmo. She went for a breezy and comfortable number with turtle neck detailing and a free-flowing silhouette. However, what stood out was that the kaftan was surrounded by fringes at the borders. She matched the outfit with bold red lips and well-defined eye makeup. She also added white strappy heels. Her hair was styled in a centre-parted messy bun. Sonam also carried a stunning clutch alongside.

Sonam Kapoor's fashion sense is fabulous and is known to everyone and her love for tassels came in yet another Taller Marmo dress only in a white that time around.

When Sonam Kapoor puts her sartorial foot forward, it has to be jaw-dropping. Like a fashionista, she wore sassy winter wear from the collection of the fashion designer house Moschino. She opted for a black top with turtleneck details with a pair of black formal pants. Amping up her look further was an ochre trench coat on her shoulders and an ochre long kilt with one thigh-high slit. She rounded off her look with black boots. Minimal makeup and her hair tied in a sleek bun suited her OOTD.

Have you seen Sonam Kapoor rocking this graffiti-pleated dress? The outfit with a matching blazer from homegrown label Doh Tak Keh was layered with a stunning black trench coat. To add to the cool boss lady vibes, Sonam picked long leather black boots. She added more pizzazz to her appearance with layered neckpieces, earrings and statement rings. The sunglasses and her hair tied in a bun with a few strands left open accompanied the look.

Coming back to Sonam Kapoor's love for kaftans, we can never get enough of it. She took a boho route once and dazzled into a regal black kaftan by Anamika Khanna. It was Diwali then, and Sonam left no stone unturned to dress up perfectly for the occasion. Her black number showed intricate patchwork and embellishments in colourful patterns. She accentuated her look with statement dangler earrings and a maang tika. Sonam went ahead with heavy eye makeup and pulled her hair back in a low ponytail.

Kaftans were a part of Sonam Kapoor's maternity fashion diaries as well. She once treated us to another gorgeous black kaftan. She wore a long, easy-breezy see-through number with a black bralette beneath. Her outfit with scalloped borders looked fine with complex lace work. She opted for smoky eyes and pulled her middle-parted hair back.

What do you love the most about Sonam Kapoor's way of dressing up?