Sophie Choudry Can Light A Pool On Fire In A Red Swim Set, That's It 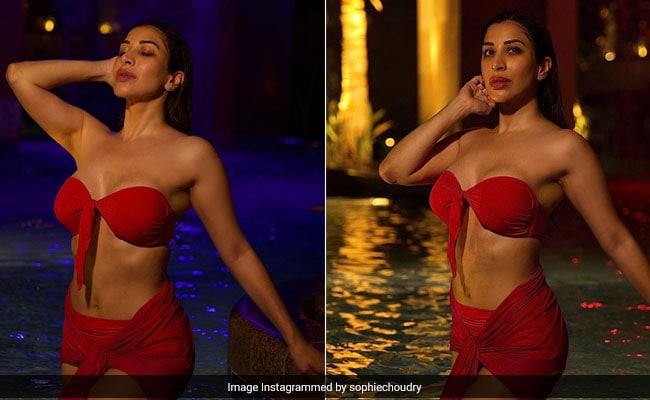 Sophie Choudry's deep plunge is as fiery as it can get

In case you anyone told you that it is impossible to set fire to water, brace for impact because we've witnessed the impossible happen. Sophie Choudry's persona has managed ignite flames to the pool in just one look. All it took was a bright cherry red bandeau bikini to do the trick. She captioned her Instagram post with the lyrics of Shah Rukh Khan and Kareena Kapoor's historical fiction, Asoka's track, Raat Ka Nasha. She channels Kareena Kapoor's character from the film exceptionally in a rather modern setup but with the same applied effect. The bandeau bikini top with the knotted front complemented the short sarong she wore over her swim set. Sophie Choudry then went ahead took a whole new monochrome step with the addition of a red lip that did wonders to fire things up further. Sophie Choudry serenading to this song, in a pool with her take on the Kareena Kapoor's tribal girl character in her red outfit is surely not something we were expecting but definitely what we needed to wash away the weekday blues.

Also Read: Sophie Choudry Ensures There Is No Room For Gloom With Her Chic Lime Co-Ord Set Around

Her latest song "Gori Hai" is not the only thing topping the charts, let's just tell you that. She is the fuel to the fire in a pool or not but when she's by the pool and dancing to the tunes, she looks just as exquisite. She grooves in a red skirt set paired a matching blouse. But we're twice as lucky because she isn't fabulous in red alone but also in gold too. Sophie Choudry saves the day and grooves to her own beats in the most stylish way.

Sophie Choudry in red is a mood we totally want to be a part of.