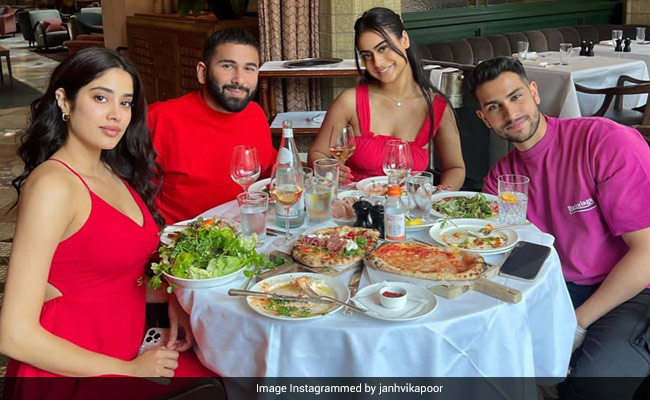 Janhvi Kapoor seemed to have a fabulous weekend in Amsterdam

Nobody else is having the time of their lives better than Janhvi Kapoor is. She squeezes a holiday every chance she gets and if you thought her European holiday was over, buckle your seat belts right up. To be fair she was shooting in parts of Paris, Berlin and other European hotspots for her upcoming film with Varun Dhawan, but then again it is Janhvi Kapoor we're talking about - the fun always follows. This time around she was catching breath with her besties in Amsterdam. On holiday too Janhvi Kapoor is her very ultra chic self. Nysa Devgan joined on the stylewagon and the both of them looked phenomenally stylish in red. In case you need a sign to twin brilliantly with your bestie on holiday, then let it be this one. Janhvi Kapoor picked a strappy maxi dress with cutouts and Nysa Devgan's smocked dress was a fit for every brunch outing from Ahmedabad to Amsterdam.

During holidays Janhvi Kapoor's summer style is at her peak. Dresses especially make the most of her summer holiday closet. Floral cami dresses can put even the most gorgeous backdrop of Berlin to shame with ease.

In fact one such holiday not very far from home, Janhvi and Nysa made a very dazzling landing in Delhi for Manish Malhtora. The fashion show was certainly just an excuse to sparkle away for these young and budding fashionistas on the loose.

Also Read: Janhvi Kapoor Adds All Shades Of Blue To Her European Summer In A Crop Top And Jeans

Janhvi Kapoor at the end of the day doesn't always need a dress to have a great summer. Give the girl a pair of jeans and the right excuse to beat the Monday blues in style, and watch her go places, literally!

So how do we steal Janhvi Kapoor's without any trace exactly? We're asking for a friend.