Sonam is not the only stylish Kapoor sister. Here's proof

The Kapoor sisters at Sonam's mehendi

On the eve of Sonam Kapoor and Anand Ahuja's wedding, social media is abuzz with pictures of the couple and their close friends and family, who have all begun the celebrations for the star's big day. While Sonam and Anand set couple goals by twinning in pastel shades at their mehendi function, the rest of the gang too brought out their stylish best by sporting designer lehengas, shararas, bandhgalas and other ethnic wear. What deserves a special mention is Sonam's sister squad, who made all heads turn by turning up looking like divas.

The Kapoor sisters - Rhea, Janhvi, Khushi, Anshula and Shanaya - were seen having a blast at the mehendi function, right from decorating their hands with intricate designs to shaking a leg to all-time favourite shaadi songs such as Gori Naal Ishq Mitha. While Rhea was busy attending to the guests, the rest of the sisters didn't miss out on the opportunity to click pictures together. Proof is Anshula Kapoor's Instagram account where she has shared a few pictures and even been setting major sister goals by using hashtags as #SistersBeforeMisters.

So here's a quick look at what the Kapoor sisters wore at Sonam's mehendi.

Sibling Rhea Kapoor picked a flowy creation by Abu Jani Sandeep Khosla named Gulabo, which was in off white with golden accents. She styled the simple gown with statement earrings.

Janhvi Kapoor was dressed in a Manish Malhotra sharara set in ivory and dull gold, which had intricate chikankari work as well as the trendy bell sleeves.

Her younger sister, Khushi, was too seen in a Manish Malhotra creation. Khushi looked stunning in a royal blue lehenga with soft pink accents and handwoven chikankari detailing, and a shaded dupatta. This was part of the designer's Mijwan collection.

Anshula Kapoor too picked a sharara set like Janhvi. She wore an ivory sharara with a maroon kurti with intricate gold work.

Shanaya Kapoor, Sanjay Kapoor's daughter, looked adorable in a baby pink skirt, matching kurta and dupatta. She completed her look with a pair of golden jhumkas and juttis. 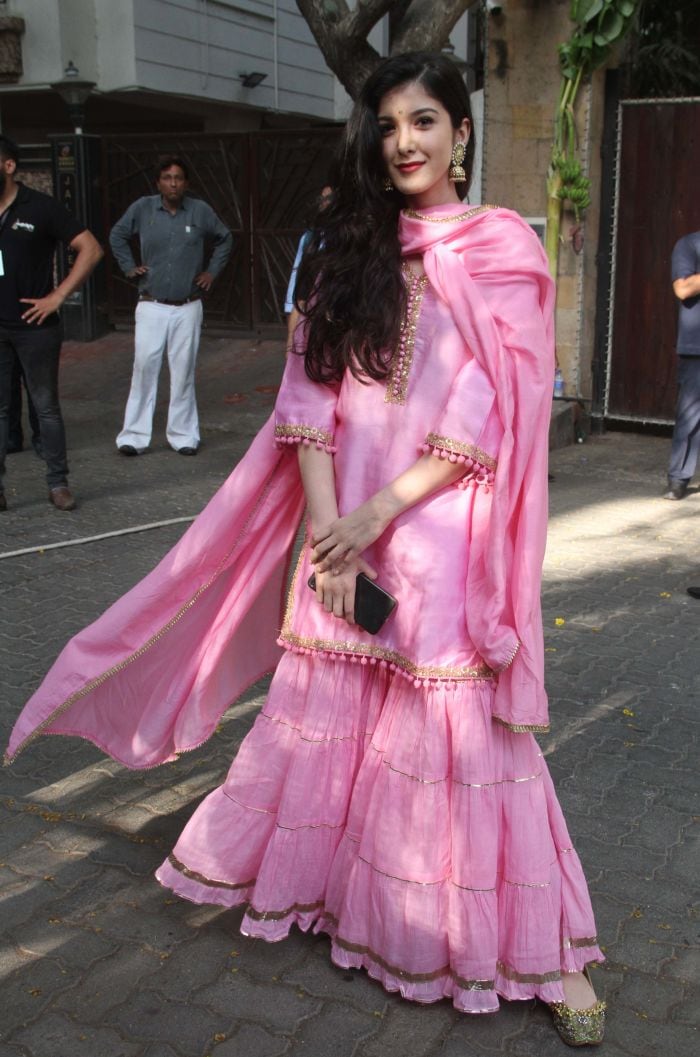 Shanaya Kapoor in a baby pink outfit for Sonam's mehendi

These girls have only got us thinking now what styles will they be sporting for Sonam's D-day. We can't wait to find out!