When Shanaya Kapoor Pairs Her Basics Right, All You Do Is Sit And Take Notes

Shanaya Kapoor has a special spot for brown outfits in her closet and we've got proof! 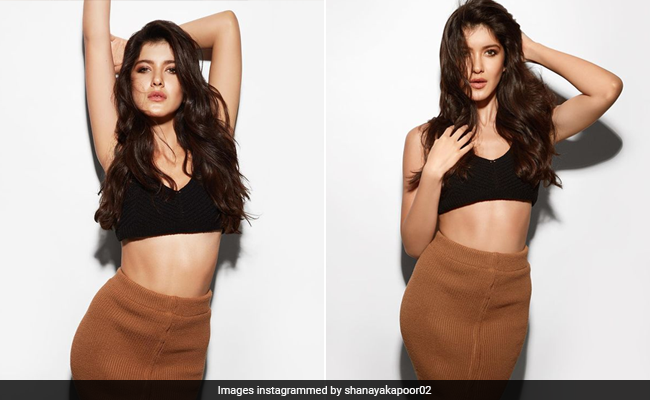 Shanaya Kapoor has gotten a stronghold on her sartorial choices even before her Bollywood debut. Actor Sanjay Kapoor's daughter keeps mesmerizing her fans with stylish pictures. The latest one is just an addition to a lengthy list of her glamorous outings. Shanaya wowed everyone in a black crop top and brown pencil skirt. The soft wavy hair steals all the attention which was styled by Vrinda Rajput. The makeup was subtle, leaving hints of pink lip gloss and rose eyeshadow - her signature makeup look. Shanaya described her own stills through a set of emoticons which fit well in the brown aesthetics of her look. The string of emojis consisted of a cookie, chocolate, animal and a brown heart.

Swirlster Picks Brown Skirts For You

Clearly, Shanaya loves to experiment with this calming warm hue. Previously, she was seen in an uber-chic combination of brown spaghetti crop top and beige pyjamas. Shanaya's magnetic wide eyes and flushed cheeks would make anyone have a double-take at the snaps. Shanaya captioned these casual stills as, “When Mumma randomly starts taking photos of you while gupping.”

Another time Shanaya made brown look beautiful was when she wore this trendy jumpsuit. The glazing off-shoulder attire was accessorised with a thin two-layered necklace and ankle-length beige boots. She looked pretty in a low messy bun look and glossy lips.

Speaking of Shanaya's love affair with shades of brown, dare you not miss this sultry look. The 21-year-old picked a strapless brown bra with a knot. She pulled over a brown blazer coat over it and rounded up the look with beige pants. Shanaya opted for multiple thin gold-plated chains for this appearance. To match with the theme, she went with neutral makeup. Shanaya, who visibly adores glossy lips, this time gave it a break. Instead, she focused on kohl-laden eyes.

We love how Shanaya is making her unique statements with brown and beige.