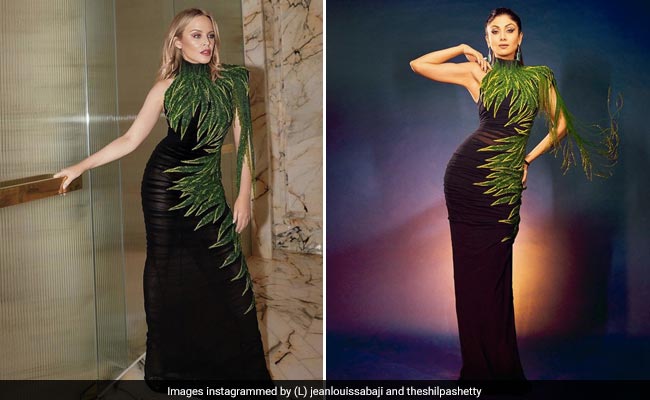 Who do you think rocked this style Jean Louis Sabaji outfit?

Celebrities make sure that their style statements stand out. From setting trends to simply flaunting the best silhouettes from their wardrobe, they love to make a unique appearance before fellow fashion lovers. However, sometimes we do witness two celebrities in similar costumes. That itself sparks a debate on who wore the ensemble better. Recently, we spotted Bollywood actress Shilpa Shetty in a Jean Louis Sabaji ensemble. The black body-hugging gown features embroidered leaves made with glass beads, bugle beads and crystals. The dress also shows off hanging beaded fringes instead of a sleeve. She wore it with geometric emerald earrings and cat-eye makeup.

Also Read: Shilpa Shetty Turns Heads As She Steps Out In A Golden Body-Hugging Number

The ensemble is a unique outfit. But Shilpa Shetty isn't the only celebrity who flattered the dress. Australian singer and actress Kylie Minogue also slipped into it earlier at an event. She flaunted it with red lip tint and loose tresses. While keeping it chic, Kylie kept it a bit carelessly glamorous. Well, can you tell who wore the outfit better?

This isn't the first time that Shilpa Shetty's outfits coincided with another's. Earlier, she and designer Masaba Gupta were seen in the same wrap top and pants. The beige outfit was splattered with black prints on it. The uber chic number belonged to the House of Masaba. The designer herself wore it in a one-shoulder manner and with minimal makeup.

However, Shilpa Shetty chose to style the outfit with statement earrings and a ponytail.

This Diwali, cousins Janhvi Kapoor and Shanaya Kapoor also had a fashion face-off. Both of them draped themselves in Manish Malhotra green saree. While Janhvi's number featured mirror work, Shanaya's outfit looked flamboyant with sequin details.

Once, Sonam Kapoor and Natasha Poonawalla were also seen in the same Alexander McQueen dress. The red outfit featured elaborate frills and billowy sleeves. The two paired the outfit with broad black belts and short heeled ankle boots. While Sonam carried a red clutch bag with the dress, Natasha complemented her look with a black purse and stylish sunglasses.

While we can't say who pulled off their looks the best, we definitely know that these celebrities styled themselves according to their own fashion sense.