With Cutouts, A Slit And Sparkling Mesh, Malavika Mohanan's Black Dress Is Like No Other 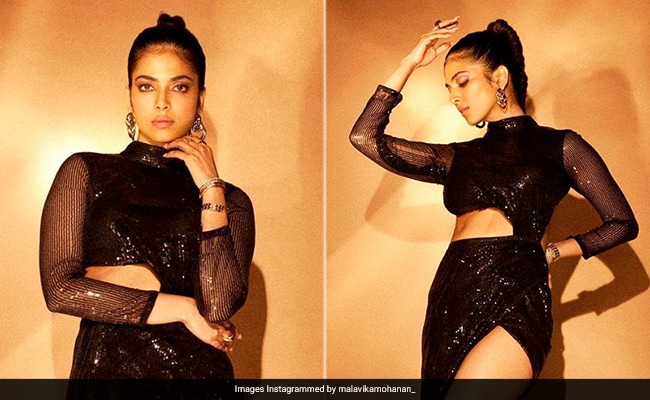 We're often challenged when it comes to the black dress. Sure it's a wardrobe classic but the same old cuts and colour and silhouette can certainly make it seem old, quick. Bollywood loves a black dress but usually plays it safe when they decide to don one. Malavika Mohanan did things differently in her latest appearance. The film star posted photos of herself in a black ensemble that wasn't like any other dress you've seen before. With its sheer long sleeves and flowing hem, it featured a large cutout detail across her torso which put her abs on display. Running down the length from the thigh was a massive slit, right until her ankle. The sparkling black dress also included a backless detail and high neckline. She wore black strap stilettos and dangling earrings while her hair was pulled into an updo. Malavika Mohanan certainly is serving up the glamour in her latest look.

(Also Read: Malavika Mohanan Shines With The Light Of A Thousand Stars In A Dazzling Silver Dress)

It seems like the actress can't get enough of black. Previously, for the shoot of a music video, she sported a pair of black leather pants and a fur vest. Lace-up boots and a choker necklace were the final touches of her outfit while she also complemented it with sparkling black winged eyeliner and her hair in a high ponytail.

There was the time Malavika walked the runway and did it in a black creation by Raghavendra Rathore, no less! The waist coat top featured a low neckline with a belted waist and a long skirt with a slit at the side.