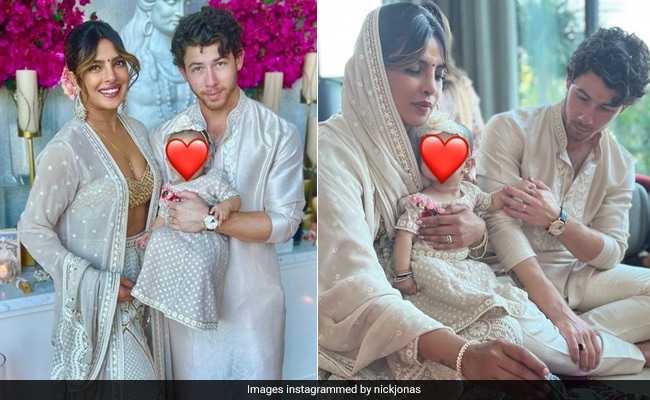 There's just something about couples who co-ordinate their fashion choices. While we see that often at the airport and even on the red carpet, we're spotting for the first time the trend taking place during Diwali celebrations. Way across the pond, Priyanka Chopra and Nick Jonas celebrated their first Diwali with daughter Malti Marie in attendance. The actress wore a white coloured ethnic set which featured a gold cropped blouse and a patterned flowing skirt. Over it was a sheer jacket draped over her shoulders. Her singer husband twinned in an ivory kurta and pajama set which featured embroidery over the yoke. Their baby girl was held close to them and also matched mum and dad! Malti sported a tiny white embroidered lehenga with head band over her head. We haven't seen a family portrait for Diwali 2022 that's cuter than this one!

Last month, Priyanka took Malti on her first trip to New York City. Mom lounged in a printed co-ord set while daughter wore a printed pajama set. Her eyes were all on the Big Apple below her though. Looks like we've got a big city girl in the making!

Earlier this month, Priyanka and Nick attended a friend's wedding and looked like the most fashionable guests around. She sported a red dress with a plunging neckline while he wore a dapper grey suit. These two can transform from one look to another so very easily.