With Husband Karan Boolani By Her Side, Rhea Kapoor Is An Elegant Bride In An Ivory Saree 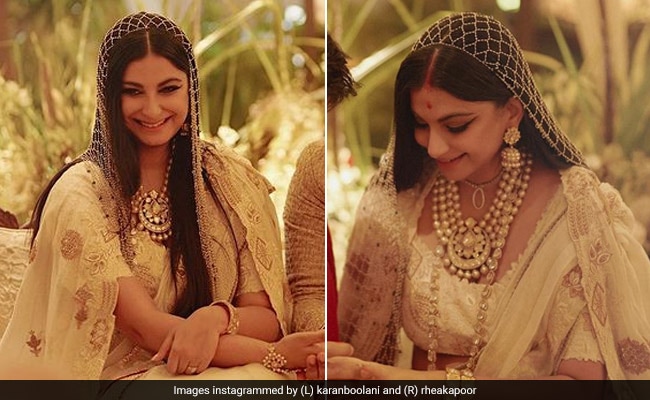 The weekend saw the Bollywood stars out in a celebratory mood and it was because Anil Kapoor and Sunita Kapoor's younger daughter Rhea Kapoor tied the knot with her long time love Karan Boolani. The guest list was at its starriest best with the likes of Janhvi Kapoor, Masaba Gupta, Shanaya Kapoor and more in attendance. Of course, elder sister Sonam Kapoor and her husband Anand Ahuja turned heads when they arrived. Days later, we've finally got a glimpse of the new bride Rhea and her husband Karan in their respective photos on Instagram. While Rhea juggles multiple hats, her fashion stylist sensibilities were strong for her own bridal look that was elegant with contemporary touches. Rhea looked stunning in an ivory toned saree with a cape draped over her shoulders and a veil over her head. Opulent gold jewellery of a necklace, earrings and bangles added a traditional touch to her bridal look. She kept her makeup radiant and subtle with winged eyeliner stealing the show.

Karan Boolani was perfectly in sync with his new bride. He paired a bronze toned patterned kurta with neutral bottom wear. Adding a colour pop to his outfit was a red stole layered on top.