With Or Without A Jacket, Keerthy Suresh's Mustard Yellow Saree Is Fusion Styling At Its Best

Keerthy Suresh is known for her envious saree collection but we bet you've seen nothing like this before!

Lehengas may be an obvious choice to twirl and swirl in but nothing beats the beauty of a traditional saree. Keerthy Suresh, for whom her sarees are an undying affair, understood the assignment on the saree style play rather well. In the midst of every saree style known to us, the traditional brocade tops the charts ten-folds and Keerthy draped one in a mustard yellow one just as effortlessly. But Keerthy Suresh had something else in mind. To elevate her style quotient she added a modern touch with a matching silk trench with a waistband cinching at the waist and we're convinced we're never going to see a traditional brocade saree the same way again. Worn over her shoulder or tied on top of her saree, traditional sarees now have a whole new meaning thanks to Keerthy Suresh.

Also Read: Keerthy Suresh Looks Elegant As Ever In A Colourful Traditional Saree 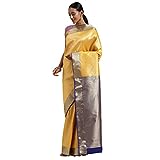 Is it the effortlessness or the ability to captivate people's attention in just one look, what is it about a red saree that draws us closer to it? Are you equally drawn to Keerthy Suresh's gorgeous red saree or need we say more?

The traditional Kasavu saree may seem like an ordinary white saree adorned with a golden border but the grace with which it falls when draped to perfection is unmatched. That's precisely why every Onam we'll be taking cues from Keerthy Suresh on how to nail the style especially with a contrasting green brocade blouse.

Traditional or not, Keerthy Suresh's envious saree collection has it all!

Also Read: Each Time Keerthy Suresh's Sarees Had A Life Of Their Own