Dharamashala: Exploring The Historical And Archeological Sites Around Little Lhasa

Dharamsala: A tryst with history and archaelogy

Just a little ahead of Dharamshala's main market Kotwali Bazar, a familiar, narrow winding road leads uphill to the dreamy town of McLeod Ganj. Little Lhasa, as the locals have named it, is a Himachal must-visit according to backpackers and trekking enthusiasts. Also famous as His Holiness The Dalai Lama's residential town, McLeod Ganj is home to quirky cafes, funky hostels, and a tremendously gorgeous view of the majestic snow-capped Dhauladhar mountain range. Perhaps, these are a few of the reasons why Dharamshala is a hit amongst today's younger generation of solo travellers and backpackers. Pedestrian-friendly and charmingly welcoming, Dharamshala calls out to travellers across the globe.

A Tryst With History

My recent trip to Dharamshala, born out of a dire need to escape the NCR pollution, could be characterised as something completely different than the usual Himachali sojourn. This time, I had a tryst with Dharamshala's history - the past glory of the Himalayan town intertwined with a natural calamity that shaped this side of the hills once and for all.

My initial intention was to spend a good two days in the lap of the Dhauladhar, with a decent view and some soothing tea to give me company. But I got more than what I bargained for. Unaware of its historical past, I had booked myself a room at the Adivaha Dharamshala for its promising view of the snowy mountains and blush-pink cherry blossoms. Little did I know, that previously known as 'East Home', this place served as a summer house for erstwhile Viceroys, such as Lord Elgin. Hardwood floors, old wooden ceilings and tasteful furniture adorn Adivaha, which has witnessed previous owners like the British East India Company and the Maharaja of Patiala.

(Also read: Weekend Getaway To Kasauli: Switch Off To Enjoy Life In A Pine Forest) 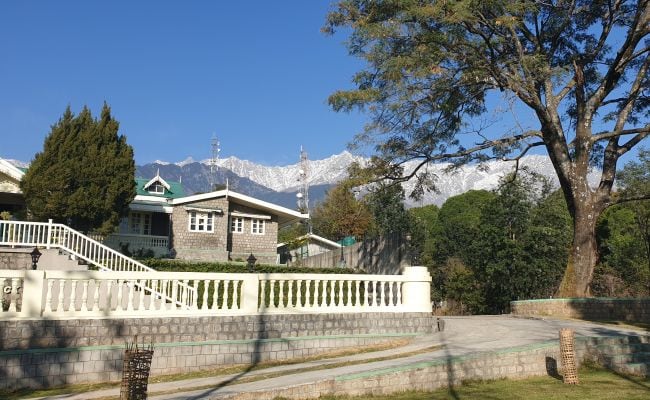 The Viceroy's Residence, which was known as East Home

As the sweet sunshine caressed my shoulders, I decided to pay a visit to the oft-suggested Kangra Fort. Probably the oldest dated fortress in Indian history, the Kangra Fort has survived as much as 52 blows but eventually collapsed to the wrath of nature. The Archeological Survey of India states that it is the eight largest fortress in the country, covering 463 acres of land. Built almost 3,500 years ago by the Katoch Dynasty that has its mention in The Mahabharata, this ancient fort overlooking the pristine Dhauladhar has been attacked by legendary personalities like Sultan Mahmud of Ghazni, Sher Shah Suri, Muhammad Bin Tughluq, Jahangir and even the British. It was once said, "He who holds the Kangra fort, holds the hills."

Jahangir had been able to siege the fortress after much violence and bloodshed, resulting in the construction of a mosque inside the premises. Interestingly, I noticed the presence of a temple at the top, which indicated that perhaps they were respectful enough not to demolish the temple of Ambika. With 21 treasure wells that were looted one by one by several attackers, the Kangra Fort is believed (by locals) to hide eight more treasure wells in its walls. The Kangra Fort has some marvellous stone structures of Hindu deities and mythological animals, restored and protected by the ASI. Presently, the fort has regained most of its old structure thanks to the ASI, which was in a state of ruins due to the massive earthquake of 1905.

(Also read: 5 Places To Visit In And Around Dharamshala To Soak In The Local Vibe) 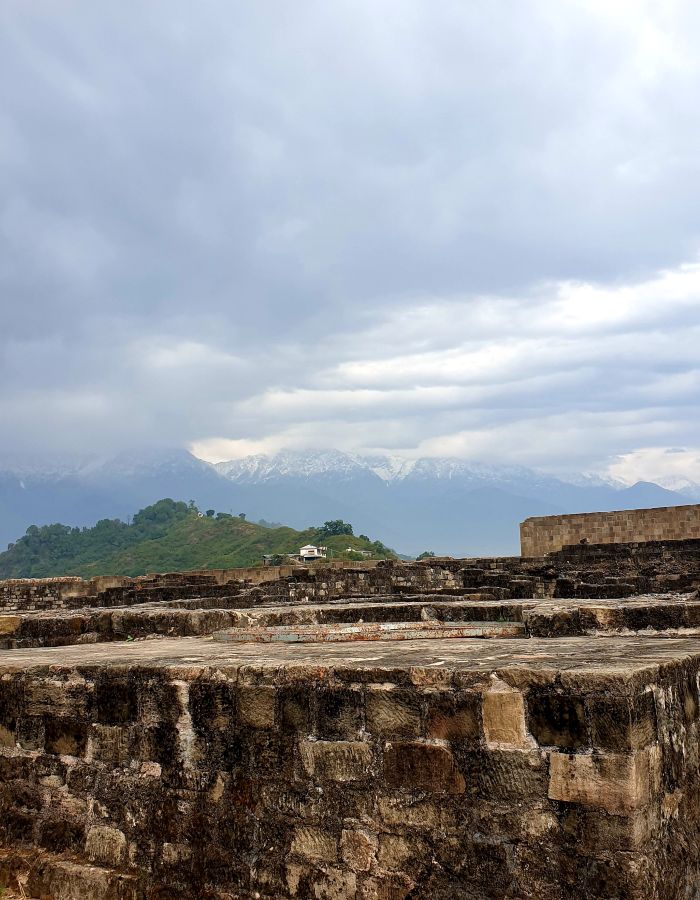 A Brooding Church In The Wilderness

My second destination, which I randomly chanced upon, was an old, eerie-looking Anglican church tucked amidst a clearing in a dense forest between McLeod Ganj and Forsyth Ganj. St John's Church in the wilderness is a Neo-Gothic structure made of black stones erected in 1835, which is so sturdy that it survived the devastating Kangra earthquake that claimed lives of 20,000 people. As I walked down the cobblestoned pathway, a mysterious air engulfed me and a chill ran down my spine - probably because it was flaunted by two ancient graveyards to its left and back. On sunny days, I gathered, light peeps through tall deodars and the beautiful Belgian glass-stained windows, donated to the church by Lady Elgin.

Sunlight appeared playful and elusive, disappearing amidst the dark foliage and dried leaves that veiled the graves of Lord Elgin, Charles Alexander Young and his family. I let out a muffled squeak when two tiny graves came to my notice. Children of Alexander and Elizabeth McMohan, Anne Elizabeth and Charles McLeod, aged 5 and 4, are some of the names among many who lie buried in St John's graveyard. But somehow, over all of the spookiness and the erstwhile Colonial setting, I could notice the carved images of Jesus of Mary looking on through the stained-glass windows, as if bestowing their blessings on the poor victims of the natural disaster buried in the grounds. 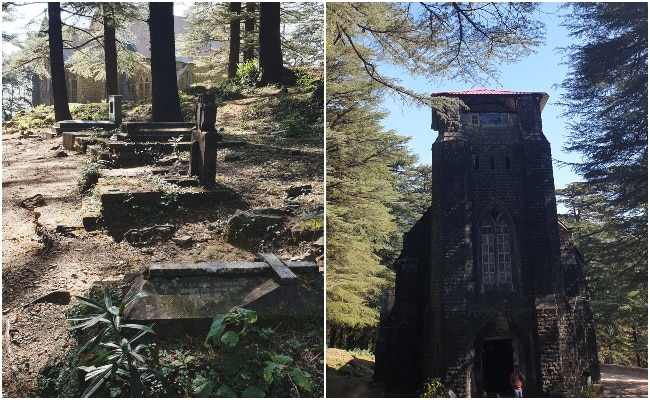 St John's Church in the wilderness is a Neo-Gothic structure

Voluntarily lost in the woods and my own thoughts, I was hinted by a clinking of the iron gates that I should make a move. I had a stroll through McLeod Ganj in mind, but on reaching, exchanged the idea for a quick visit to the Dalai Lama Temple Complex. Home of the 14th Dalai Lama, the temple serves as an unshakeable validation of identity for the Tibetan people in exile. A peaceful, meditative structure nestled amidst the lofty snow-capped Dhauladhar, Dalai Lala Temple is a spectacle of a perfect blend of modernity, serenity and ancient traditions. 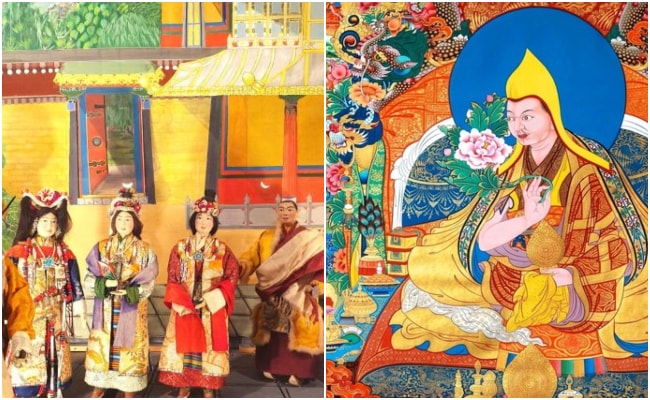 I went straight for the balcony and watched the sun go down as it painted a purple sky at the horizon. And there I stood in the lap of the Himalayas, which is considerably a young mountain range that has witnessed the confluence of several traditions and cultures, inspired countless minds and has seen the course of history change multiple times. From ancient Rajput valour and Mughal glory, the dreamy town of Dharamshala has traversed a pompous Colonial era to the pristine Buddhist setting of today.

About the author: Always on the go, Sayantani Chakrabarti is the kind of traveller who never longs for the destination, but craves for a memorable journey. When she's not travelling, Sayantani likes to lounge with a pacy book and some Sinatra in the background. Her blog called I Chronicle is testament to her unyielding passion.