It started with a hashtag and ended with a full time job. 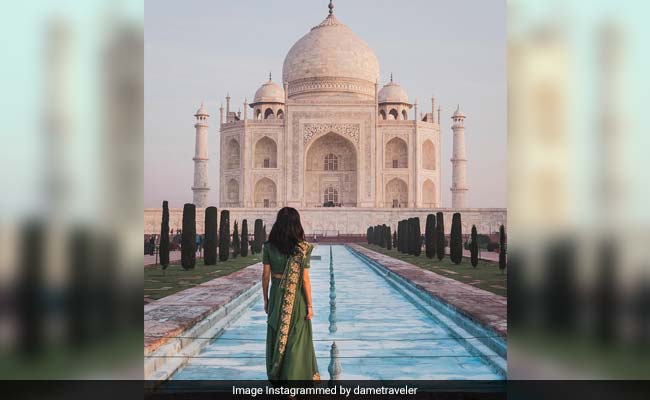 When a workplace accident left her on bed rest for nine months in 2013, Nastasia Yakoub's future in nursing was uncertain at best. "I fell into depression because I had studied for four and a half years to became a labor-and-delivery nurse," Yakoub, 30, said. "I needed something to distract me."

To pass the time, she began posting old snapshots under her Instagram handle, @DameTraveler, a name chosen to share the empowering concept of independent female travelers. After the popular @BeautifulDestinations reposted one of her photos along with its hashtag, Yakoub was inspired to add a hashtag to her own posts. Following an outpouring of attention, she opened the account to the community and began reposting tagged images that caught her eye.

More than 1.5 million posts of young women conquering picturesque world destinations now appear under #DameTraveler, all hoping to be featured on the account, which has 387,000 followers. Many popular travel accounts have implemented the same hashtag-based curatorial methods to gather content, and @BeautifulDestinations tops 9.8 million followers, compared with old-school travel publishers such as Conde Nast Traveler, which has 1.4 million.

Unlike traditional influencers - adspeak for high-profile people who drive public opinion - the users behind these indie accounts are not the stars of the show. Yakoub occasionally appears on the @DameTraveler feed, but documents her own travels on a personal account, @nastasiaspassport.

She said that it takes her 30 minutes to an hour to pick each DameTraveler image, and she chooses one or two per day from those appearing under the hashtag.

"I'm very picky about the aesthetic and feel," she said. "That quality of the feed is what makes it successful."

In addition to the exposure, a repost - known as regramming - earns the photographer a certain amount of travel-elite street cred.

"About 2 percent of what you see on the account is my photography; the rest is other people's," said Andy McCune, 22, who oversees @Earth, an account with more than 800,000 followers. "We get hundreds of DMs and about 50 to 90 email submissions every day."

McCune got the prime handle from a friend who was an early adopter of the platform. His iteration of @Earth was launched in 2015. McCune curates the feed and seeks out images that reflect his appreciation of nature. A Washington-state native, he favors lush, towering forests, mist-frosted mountain peaks and frothy rushes of water.

In the account's early days, McCune reached out to notable travel photographers with large followings and began to repost work that fit his aesthetic.

"Once I gained three or four relationships, we started getting more intros and the ball kept rolling," he said. "It's given me some of the best friends of my life."

As the clout of social-media influencers increases, some accounts have become modern-day travel guides. McCune, who splits his time between New York City and Tulum, Mexico, has expanded @Earth's reach by partnering with YouTube vloggers and social media travel mavens to create travel guides, photo journals and video content. (He curates @Tulum, as well as @Traveler and @Forest.) Yakoub did something similar, creating additional handles such as @DameTravelerFoodie and @DameTravelerHotels to zero in on specific categories.

Like McCune and Yakoub, 31-year-old Zach Houghton started out with an Instragram account and ended up with a full-time job.

"I never set out to create something this big," said Houghton, who curates @Passionpassport, an account with almost 900,000 followers. "I first started to showcase the beauty of travel and create editorial content that gives people the opportunity to understand what power travel has in our own lives."

The former trader was working in Hong Kong when he left the world of finance for a nine-month, 15-country trek that he documented in a blog and on Instagram. When the project ended, he opened the account to the community. By 2015, the hashtag had 1 million photos; today, it has more than 10 million.

Houghton ultimately parlayed @Passionpassport into Passport Studio, a company that creates sponsored content around the themes of travel and discovery. The hashtag that started it all remains among Instagram's top travel accounts, and Houghton says that he's still on the lookout for undiscovered photographers with the same spirit that inspired him to start the account.

"Everyone has valid things to do and say and show, if you give them the opportunity to do so," he said. "It's not just those epic, jaw-dropping moments - it's those quiet moments of travel that are worthy to talk about."

Raczka is a writer based in Boston and New York City. Her website is rachelraczka.com. Find her on Instagram: @rachelraczka.