Wacky food in every shade of the rainbow was 2017's name of the game. 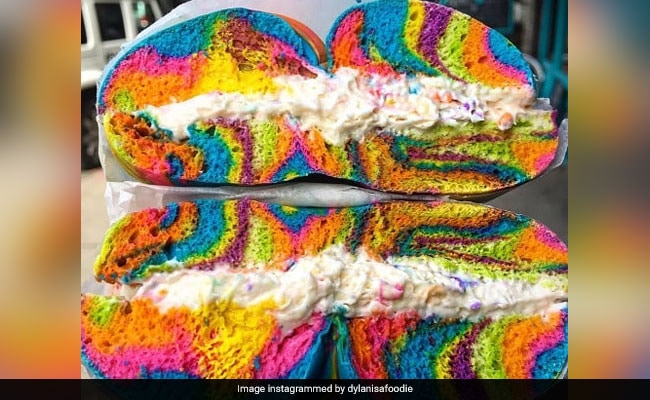 Experimentation is everywhere, from graphic makeup to red carpet couture. So why should a food menu be any exception? At least, that's what 2017 thought. Along with gluten-free pizza crusts and vanilla foam topped cocktails, this year also saw food that was whacky, wild and almost out of the world. Want to know what they are? Then join us as we take a trip through 2017's wildest food trends.

We're used to seeing our icy scoops in pistachio greens and even blueberry mauves, but jet black? Yes please. Created with the charred ashes of coconut shells, the flavour was termed 'coconut ash' and did indeed leave one's teeth black. Now this is just the kind of dessert you need to bring out your inner goth goddess. Or maybe not.

An ingeniously put together doughnut and waffle led to the birth of the doffle, or wonut, if you will. This love child was born when the classic glazed doughnut went through a waffle iron to come out, embossed and crispy, to be eaten as a sandwich or a stack. Sunday morning breakfast doesn't get any better than this, if you can ignore the calorie and sugar overload.

2017 was the year of the unicorns, clearly. Even grilled snacks weren't spared. The string cheese in the sandwich is tinted in rainbow colours and, we have to admit, it was super fun pulling the multi-coloured cheese apart after it was grilled. Thankfully, despite its unique colour, the unicorn grilled sandwich tasted perfectly normal - not sugary at all.

If you're the kind of person who believes there's glitter running through your veins, the Gold And Diamond Cappucino will be your beverage of choice. Created by Mumbai's Coffee Di Bella, the foam art on this coffee is generously lined with edible glitter, and found takers all over the world. Who doesn't want a sparkling cup of joy, after all?

Although Sushirittos (sushi + burritos) were technically created a few years ago, they really hit the height of popularity in 2017. It is every Japanese cuisine lover's favourite meal, magnified tenfold - the mini maki rolls we're used to became the size of a full-fledged wraps. Now which sushi lover would say no to a California roll the size of their hand?

There's no better way to start the day than with a big rainbow-coloured bite of a bagel with cream cheese. Even though the vibgyor-hued snack was crafted by Scott Rossidillo of Brooklyn years ago, Instagram was responsible for its revival in 2017. You just know the hearts are going to come knocking when you post a picture with your outstretched arm holding a rainbow bagel sandwich with cream cheese oozing out.

A dessert that's absolutely transparent? Anything can happen in 2017. The raindrop cake finds its origin in the Japanese dessert Mizu Shingen Mochi, but grabbed global attention after Darren Wong's reinvention of the dish. The jiggly, clear dessert is generally flavoured with the brown sugar syrup and soybean flour that's served along with it and is said to taste refreshing.

Now which of these radical food trends of 2017 would you be game to try? Do let us know in the comments below.