The criticism for Ivanka's tweet far surpassed the favourites and retweets 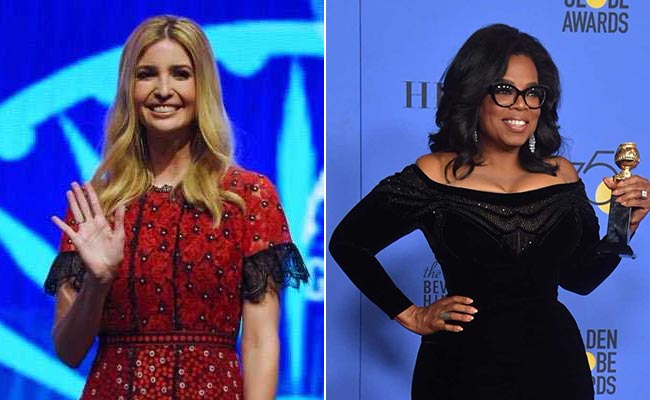 Twitter was not amused with Ivanka's attempts to champion women's rights

Sometimes, it's just better to lie low, keep the lips firmly pressed together and wait for the storm to blow over.

Now, if only someone could tell Ivanka Trump that. Given her latest outing on Twitter, you would think she doesn't have a battery of public relations experts and media strategists on her (and her father's) payroll to tell her that. Oh wait, she does, they do. As a woman, and the press secretary of the White House, Sarah Huckabee Sanders should have known what an avalanche of disdain would follow Ivanka's "congratulations" and "Time's Up" exultations on Twitter, after the Golden Globes yesterday. Sanders' junior-most assistant could have told them that. But then again, who's listening?

Oprah Winfrey, recipient of the Golden Globes' Cecil B DeMille award, delivered a rousing speech that prompted the trending hashtags #OprahForPresident and #Oprah2020. Ivanka, First Daughter and trusted advisor to her much-ridiculed and widely criticised father Donald Trump, decided to jump on to the bandwagon of Oprah Winfrey's many admirers over her exceptionally powerful and uplifting speech. Ivanka tweeted her congratulations to Oprah, saying:

Which would have been fine if Oprah's speech hadn't been, in its entirety, about race and gender, and the long, difficult, unending battle for equality. How could it not be, considering she is the first Black woman to have been presented the honour, a full 36 years after the first Black man (Sidney Poitier, 1982) won the same award?

Race and gender equality. Two causes (but not the only ones) that Ivanka's father has been personally responsible for striking severe blows against in the one short year he's been in office. Often, as Ivanka stood silently by with a blank smile, even as she tried to become the poster-girl for the challenges of working women in her country, and across the world. 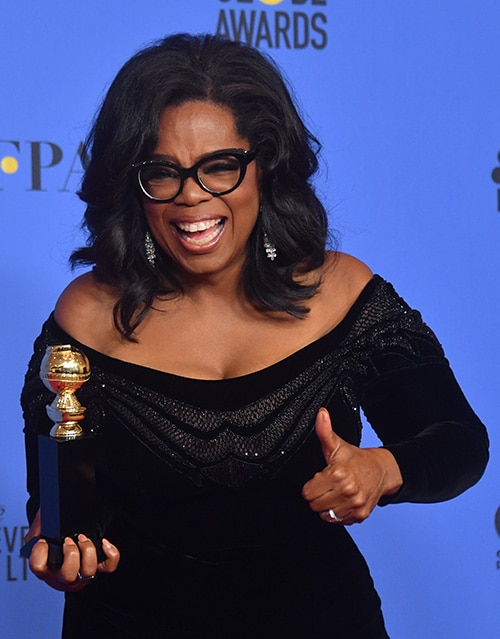 Again, it's difficult to fathom why Ivanka felt the need to pipe in with her congratulations, with all the disingenuousness of a woman who has happily enjoyed the spoils of the power wielded by a rich, powerful, openly racist father also accused by as many as 17 women of sexual abuse and assault. A father she has whole-heartedly defended on numerous occasions. If there was one person who really should have just shut up yesterday, it was Ivanka.

Thankfully, Twitter was alert and more than equipped to tell Ivanka to go away; that she wasn't welcome in a conversation about the rights of women and minorities. The backlash was swift, cutting and absolutely on point. The best one came from actress Alyssa Milano (of #MeToo fame) who helpfully directed Ivanka to the Time's Up legal fund page to make a donation that would help support her father's accusers.

Great! You can make a lofty donation to the Time's Up Legal Defense Fund that is available to support your father's accusers.https://t.co/A8HCVa715v

A host of men and women joined in the criticism - some succinct, others verbose. And there was a smattering of wit, as well.

Ivanka saying "Time's Up" doesn't just tell you something about her intelligence (or lack thereof); it tells you what she thinks about everyone else's.

“Dumb as a brick” is a cruel but apparently accurate description. https://t.co/02qrkr795y

This is the most hypocritical, clueless statement in her regrettable time in the WH. Your father has a trail of victims and supported Roy Moore, Ivanka. YOU are indeed part of the problem Ivanka. #complicit

Ivanka may have just done the unthinkable. She may have taken the title as the most intellectually challenged of the adult Trump children. https://t.co/Z0UzEYKA30

The American public's outrage and contempt for Ivanka's vile tone-deafness is justified, considering President Trump has informally earned the sobriquet of "pussy-grabber," entirely by virtue of comments he has made in the past. Before Trump, nobody could have imagined that a phrase as reprehensible as this would enter the world's lexicon so widely, while describing the president of the United States.

He slut-shames powerful women in office - less than a month ago, he crudely implied that Senator Kirsten Gillibrand would "do anything" for campaign donations; has fat-shamed innumerable women, including a former beauty pageant winner - he called Alicia Machado "Miss Piggy" for putting on weight; he routinely comments on the looks and sexual lives of female actors, politicians, journalists, talk show hosts, teenagers, and even his own daughter... Basically, at this point, one is forced to wonder if there is any demographic of women safe from Donald Trump's sexualised commentary. 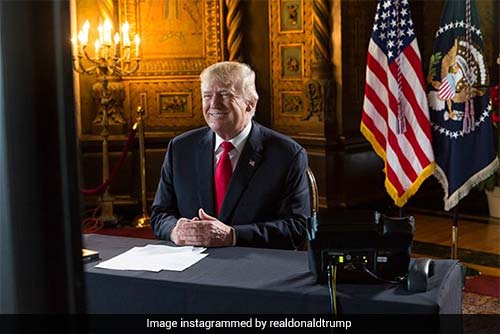 Donald Trump habitually paints people of colour and non-White racial identities (mostly Blacks and Mexicans) as anti-social elements that are perpetrating violence and disrupting the peace of the US, while carefully avoiding the racial terrorism and mass shootings by disturbed white folks. He's questioned, multiple times, the citizenship of former president, Barack Obama. Here too, the list of his misdeeds is long and exhausting.

Trump has also, to widespread criticism, enacted policies and programmes that harm women, children and vulnerable minorities. He's reversed former POTUS Obama's provisions to track the pay gap based on gender and race in companies, reversed on-campus sexual assault directives that required universities to investigate sexual assault complaints on priority, severely hampered access to safe birth control - an important provision under Obamacare - disbanded the White House Council on Women and Girls, blocked funding for Planned Parenthood, and, most infamously, enforced the Global Gag Rule, which stipulated that any NGO that received US aid for global health issues could not use even the money they got from other funders to provide or talk about abortions, which effectively meant that unless NGOs committed to women's health could not use US aid.

He's pulled back investigations against local and state police forces that were meant to identify racial profiling and discrimination in law enforcement agencies, is trying to get the Justice Department to set up a team to investigate and sue schools whose affirmative action policies (meant to even the playing field between the powerful and vulnerable) were found to be discriminatory on the grounds of race - basically, if White people were discriminated against when the universities tried to take affirmative action for the Blacks and Latinos. 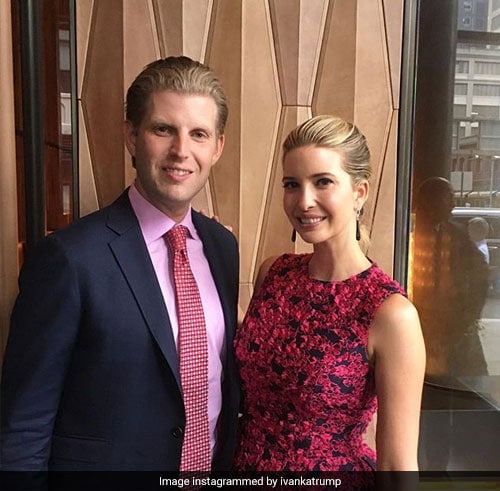 It's true that the crimes of the parents should not be used to penalise a child. An unfortunate accident of birth should not be a person's only identity. But this belief does not apply to Ivanka's case.

She's actively used her father's wealth, notoriety and position as the president to strengthen her own brand as a champion of women's rights. As an unusually active campaigner during Trump's bid for presidency, she spoke and made him say, all the right things - a Republican candidate, especially Trump, talking about closing the wage gap, talking about childcare and speaking favourably about Planned Parenthood had seemed unimaginable, but Ivanka had made it happen, with her influence of her flighty father. She made America believe that maybe, just maybe, the man-child could be cajoled into policies that benefited everyone, not just heterosexual white males.

Once elected, though, all those carefully worded promises seem to have flown out of the window. Scarcely a month has gone by without Trump proposing or enacting something that endangers the lives and livelihoods of non-White communities. The climate of fear in Trump's America might be his doing, but it would be foolish to think that Ivanka has not been willingly complicit in making rich lives richer and poor lives poorer. 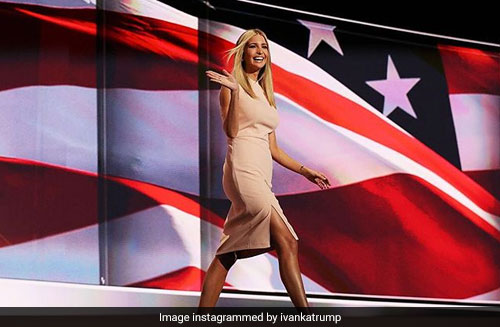 As a woman who has never experienced a day of hardship or poverty in her life, safely cocooned behind the wall of wealth, privilege, and now power, that her father's standing affords her, Ivanka Trump's praise of Oprah Winfrey is glib and forgettable. But it shows an insufferable lack of self-awareness in the context of what her father has unleashed - while she silently watched - on women and marginalised communities in the last year alone. The facade of feminism Ivanka so carefully adorns and performs to was just too much to take for people in the immediate aftermath of Oprah's raw, real, straight-from-the-heart speech.

The ludicrousness of the situation is further highlighted by the fact that Oprah's speech has sparked conjecture and hopes about a possible presidential run for the media mogul. Coming on the heels of the suggestions made in Michael Wolff's controversial bestseller, Fire and Fury: Inside the Trump White House, about Ivanka's own presidential dreams - that she, not Hillary Clinton, would be America's first female President - Ivanka's compliments seem almost comical.

In the sardonic words of Wolff himself, who was asked about Ivanka's ill-thought-of tweet during an appearance on MSNBC, "Who does she think her father is? What does she think this White House is about?"