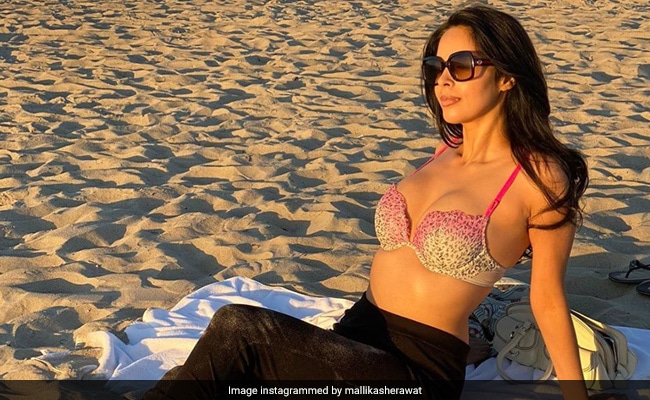 Even with new entrants into Bollywood practically every month, some faces are never forgotten. Mallika Sherawat is one of them. After shooting to fame with Murder, Mallika became a household name in the early 00s for her sultry appeal and oomph. Although she has mainly shifted her focus from the Bollywood spotlight right now, she isn't one to fade from memory. Going by her Instagram feed, these days Mallika spends her time in and around Hollywood, rubbing shoulders with the likes of Bill Gates and practicing yoga.

"The real practice of yoga is going within yourself"

Mallika, who is rocking an incredible physique at the age of 43, shared with IANS what keeps her in shape. "It has been five to six years since I have been doing Iyengar yoga. I love it because it is based on alignment of the body and is very good for your mental health, too. It is like meditation; it is a great stress reliever and promotes positive inflow, which I really enjoy. That's the main reason I do Iyengar yoga; the physical benefits are secondary" and continues, "Today there is one form of yoga which I call the fashion yoga. They play loud music and do yoga. That is not the real practice. The real practice is going within yourself. One shouldn't do yoga with loud music and mirrors around as it distracts the senses. For me, Iyengar yoga works the best."

"We have to be careful about what we consume"

Besides yoga, Mallika is serious about following a healthy diet, which normally comprises of homecooked food. She also strictly tries to follow a no-eating-outside rule. Says Mallika, "I was always a vegetarian and for the last 10 years I have been a vegan. I think what our grandparents used to eat was real food, full of nutrition. Now there is so much pollution and pesticides; the quality of food has gone down. We have to be careful about what we consume nutrition-wise." With respect to her diet, Mallika adds, "I eat a lot of fresh fruits, vegetables, green juices and nuts. I prefer nuts as snacks and strictly avoid gluten."

(Also Read: Get Yourself A Timeless White Shirt Like Mallika Sherawat's)