They're just as famous as their celebrity owners 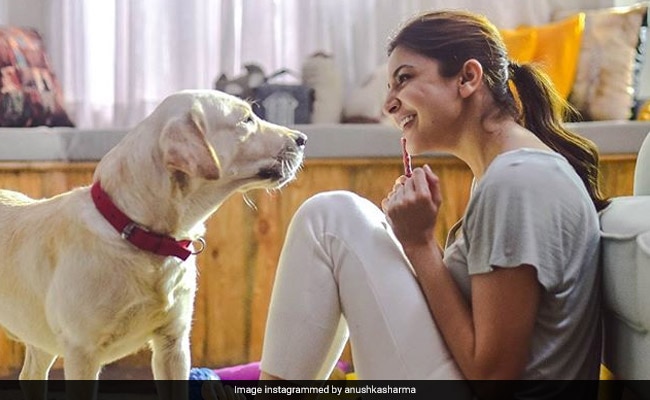 Celebrities, they're just like us, right? Well, not when it comes to their pets at least. Whether they've got a litter of pups or a sofa full of kitties, celebrity pets take things to another level entirely. Not only do they garner their share of the spotlight, they are pampered and preened much more than we can ever hope to be. These 10 famous pets from Hollywood and Bollywood are basically celebrities themselves who are living their best lives.

Hunky Tom Hardy may be a tough guy who is always posting pictures of motorcycles but he's a softie when it comes to his dogs. Although his beloved dog Woody passed away last year, he's taken a shine to a few more pups (Blu seems to be his favourite) and is also fostering dogs. Now that's a good-looker with a heart of gold.

Anushka's love for her Labrador, Dude, is well-known and has been documented time and time again to the extent that her fans know him just as well too. Not only does she love spending her days with him, she has even championed the cause of pet-friendly festivals. Thatta girl.

Post the loss of her adored chihuahua Tinkerbell who often sat pretty in her purse, Paris has a few new dogs. The gang is called Hilton pets and her favourite among them seems to be Diamond Baby. In true Paris style, the privileged pups pose with her for pictures and get this, even have their own doggy mansion.

She may be just five years old but both North and her pet dog Sushi are already mini celebrities in their own right. According to People, after pleading with her mother Kim Kardashian, she got a puppy whom she named Sushi as Kim thought it would be a good idea to ready her for a sibling. Don't they look adorable together?

We're beginning to think that Priyanka's pup Diana might just overtake the star in terms of popularity. Not only does little Diana have her own Instagram account and is featured snuggling with Priyanka, she is also the latest cover star of Elle. Told you she was famous.

Amongst every celebrity pet, the most iconic is Karl Lagerfeld's kitty, Choupette. According to CNBC, she came into his life when pet-sitting and slowly went on to even inspire many of the fashion giant's collections. As you'd imagine, Choupette lives a lavish life and even has her set of personal maids.

While most celebrities opt for cats and dogs, Miley went ahead and got the whole zoo. While she's the proud owner of many dogs, birds and fishes, her most popular pet is pig Bubba Sue. Along with being a part of her many selfies, Miley and Bubba have even covered Paper Magazine together.

While Jacqueline Fernandez's cat Miumiu had already achieved celebrity pet status by being a permanent fixture on her Instagram profile, the actress added little Yoda to the brood last Christmas. What we'd give to cuddle next to that little fur ball already.

Alia and sister Shaheen had their hands full with a couple of naughty kittens, Pika and Sheba, but went ahead and added Edward Bhatt to the lot. Alia has also been a long-time advocate for animal welfare so a large litter of animals in her household is expected. They must be a handful, but don't they look adorable?

Just like their pet mom, Taylor Swift's cats are also incredibly famous. Named Meredith Grey and Olivia Benson after characters from Grey's Anatomy and Law & Order, Taylor frequently features her cats in pictures and even adds them into her video shoots.

Ah, the life of a celebrity pet. Which one is your favourite? Tell us more in the comments.