8 Terrifying Movie Picks To Grab Before IT Arrives

IT Ends is releasing in theaters soon (Image Credit: It Movie Official)

Fans of thrilling horror franchise IT, get set because the second installment is set to release. Based on the Stephen King bestseller, the movie about a daring bunch of kids named the losers, red balloons that appear out of nowhere and a killer clown has become an acclaimed film in the genre and a top choice in every horror movie buffs list. Before buying your ticket for the first show this weekend, grab these amazingly terrifying IT picks.

IT by Stephen King dives into the creepy history of Derry and a frightening being that appears in storm drains and sewers that makes nightmares come to life.

The Funko Pop Keychain is a vinyl figure of a crazed Pennywise the clown with spider legs for arms with a metal key chain attached.

The Dinngo Men's White Printed T-shirt is a white regular fitted polyester t-shirt with a square red toned print of Pennywise from the 2017 movie.

The Funko 5 Star Collectible Figure is a stunning vinyl collectible of a wide-eyed Pennywise with a red balloon and paper boat. 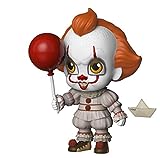 The Hitsan Incorporation Latex Clown Mask will have you prepared for Halloween a little early. From the red hair to the painted face, it is a replica of 2017's Pennywise. 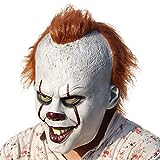 The Funko Pop Movies Collectible Figure is a vinyl figure of the yellow raincoat-clad Georgie Denbrough and his paper boat, the S.S.Georgie.

The IT (2017) film, which is the first chapter in the franchise, will fill you in on all the details you need before you head to the movies.

IT Ends: Chapter 2 is the second chapter in the franchise and a BluRay disc of the upcoming movie that can be pre-booked before it releases. 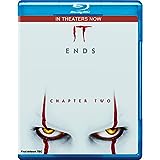 It is movie memorabilia that you'll always remember this classic by.