Game Of Thrones Merch For The Ultimate Fan: 7 Picks, From Jewellery To Action Figures

It's finally here. After years of witnessing seasons of unexpected twists and some of the most shocking character deaths in television history, the highly popular Game of Thrones series is coming to a close. It's a bittersweet moment for GoT fans as they get ready for the conclusion they deserve while simultaneously dreading the end of the fanfare that surrounded the world when a new season dropped. It's a momentous occasion and can be marked in one and only one way; with merchandise to remember it by so take a look at our list before the big series finale.

(Also Read: 9 Game Of Thrones T-Shirts To Bring Out The Superfan In You)

The Song of Ice and Fire: A Game of Thrones boxset is a set of 7 bestselling books by George R. R. Martin on which the television show is based. Go back to the beginning when you dive into these pages.

The AccessorisinggGame Of Thrones Inspired Jewelry is a chrome finished charm bracelet that includes some of the most memorable quotes and symbols from the show, including the sword and the throne.

The Aerohaven Cushion Cover is a set of 4 Game of Thrones inspired digital printed cotton covers that will get your home ready for the finale. 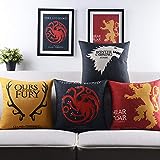 The CreativeGame Of Thrones Ceramic Coffee Mug is a black and white printed ceramic mug of Tyrion Lannister and one of his most famous quotes.

The Funko Pop Daenerys Targaryen Action Figure is a 4-inch high vinyl action figure of the mother of dragons with her signature platinum blonde locks and of course, her dragon.

The Redwolf Game of Thrones Decorative Wall Clock is a hanging wall clock with a durable black plastic case and clear lens with GoT themed designs over the face. 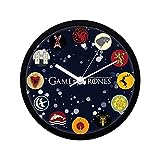 It's the end of an era and that's the fitting farewell it deserves.