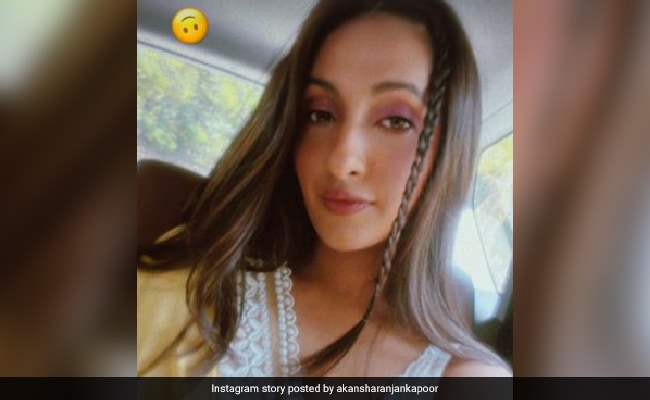 Alia Bhatt is finally set to marry Ranbir Kapoor today and we can barely keep calm. A union that started as a childhood crush, was years in the making and witnessed plenty of delays will finally see the Bollywood stars unite; not just on-screen this time. Until now, wedding details are hush-hush so we're waiting with bated breath for all we can get. The mehendi function that took place a day ago saw Ranbir and Alia's close friends and family in attendance. The guest list included Neetu Kapoor, Shaheen Bhatt, Pooja Bhatt, Mahesh Bhatt, Kareena Kapoor, Karisma Kapoor and many more. Front and centre was Akansha Ranjan Kapoor, long time childhood friend of the bride-to-be. Akanksha gave us a glimpse of what she wore to Alia and Ranbir's mehendi function. In her selfie posted on Instagram Stories, the celebrity is seen in what appears to be a sleeveless white self-designed blouse. Draped over the shoulder is a gold dupatta which also features a white patterned border. We're still guessing whether it's a lehenga or a suit but the breezy colour scheme certainly suits these summer days. 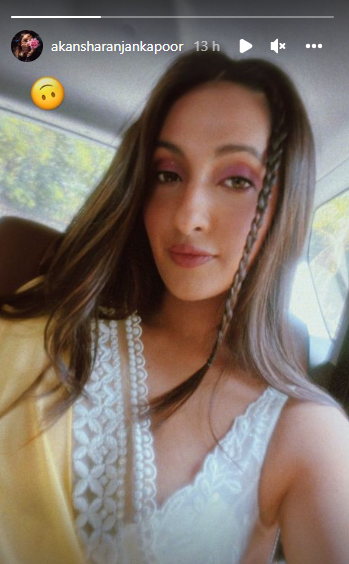 But while every other celebrity in attendance at Ranbir Kapoor and Alia Bhatt's mehendi sported glitzy makeup to match their shimmery ethnic wear, Akansha's caught our eyes for well, her eyes. To pair with her ethnic outfit, the Bollywood actress opted for a deep burgundy toned eye makeup look with a full lash. Defined eyebrows framed her face while a neutral brown lip completed the look. Akansha completed the beauty look with her hair worn straight and a tiny braid right up front. There's no cooler look for the bestie of the bride than Akansha Ranjan Kapoor's.

(Also Read: Alia Bhatt Throws Back To A Maldives Beach Day In A Fabulous Pink Bikini)