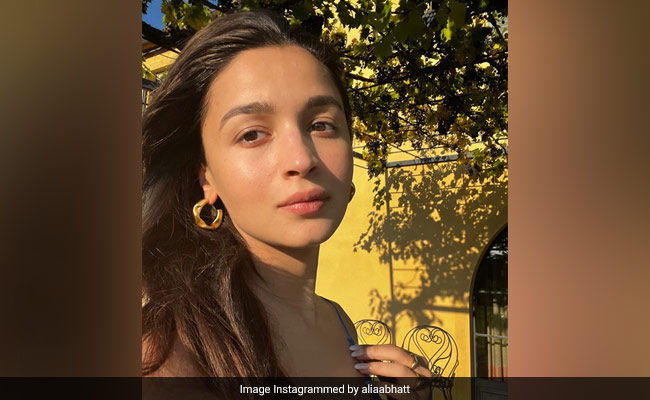 Alia Bhatt glows flawless while on vacation with Ranbir Kapoor

Alia Bhatt is currently at the top of her game. The actress is all set to welcome her first child with her husband, actor Ranbir Kapoor, and we are excited. The actress is happy and it is visible in her pictures. Alia just shared a breathtaking selfie of herself on Instagram sending the internet into a meltdown. Dressed up in a gorgeous blue outfit, it's Alia's pregnancy glow that's shining brighter than ever. The actress has taken the minimal route when it comes to makeup. In the snap, she could be seen wearing blush on her cheeks and a glossy lip tint to complete the look. Her naturally radiating skin is enough to set some major skincare goals for us. She accessorised herself with golden hoop earrings and rings.

Alia Bhatt is a pro at making us swoon in a variety of style statements. Be it ethnic or western, she wears them all with equal sass. She was spotted in a deep blue kurti and palazzos. Her kurti featured cape sleeves, a v-neckline and pleat details in the front. With that, she picked traditional dangler earrings. The actress beautified her look further with nude makeup that included mascara-laden eyelashes and a dash of nude shade on her lips.

Alia Bhatt made our day in a stunning yellow dress. She appeared like a ray of sunshine in the flouncy chic yellow number. Her signature minimal makeup accompanied her charming look. With some blush on her cheeks and mascara on her eyelashes, she chose a subtle nude glossy shade on her lips. Alia secured her tresses in a ponytail.

Alia Bhatt is a minimalist queen but the beauty really doesn't need to take much effort to appear gorgeous. Once, she posed for the camera and treated us to her contagious smile with those adorable dimples appearing on her cheeks. Alia didn't opt for any elaborate makeup but rather made us swoon with her natural look. She just let her pregnancy glow shine in the beautiful selfie.

Also Read: Alia Bhatt Leaves Us In Complete 'Shreds' In Her Ripped Jeans And Blazer

Seems like Alia Bhatt is a fan of natural light and loves basking in the sunlight soaking up some vitamin D. Here's another picture where we can see the diva spending some quality time rejoicing in the sun rays. She wore a tie-dye white and mustard T-shirt with black pants. A pair of sneakers sealed her look. Don't miss her naturally glowing skin as she left her open cascading down her shoulders.

Also Read: Alia Bhatt Knows Exactly How To Put Ranbir Kapoor's Blazer To Good Use Over Her Mini Dress