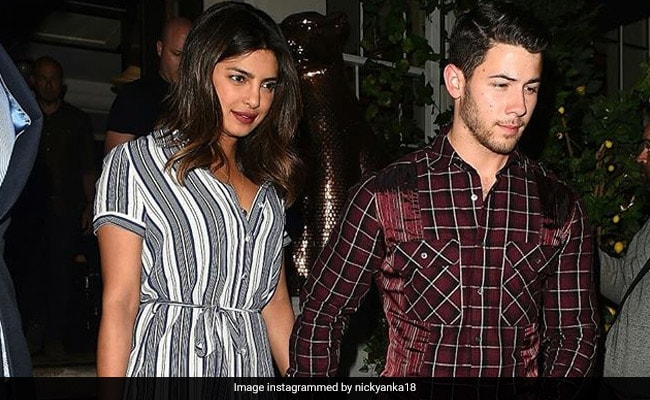 Are you sitting down for this? We'd advise you too. This just in: Bollywood star and global icon Priyanka Chopra is reportedly engaged to singer and Hollywood actor Nick Jonas. While the couple have been linked together at 2017's MET Gala, it was two months ago when their sightings became steady. According to People, Nick is said to have closed down the Tiffany & Co. store in New York City to pick a ring and then subsequently popped the question to Priyanka on her birthday in London. Looks like our prediction of her 36th year being an amazing one really is coming true.

To add to the speculation, Priyanka has also suddenly pulled out of Bollywood flick Bharat, her much talked about film with Salman Khan for which shooting had already begun. This was confirmed by filmmaker Ali Abbas Zafar in a tweet which hinted at a certain Jonas brother.

Yes Priyanka Chopra is no more part of @Bharat_TheFilm & and the reason is very very special , she told us in the Nick of time about her decision and we are very happy for her ... Team Bharat wishes @priyankachopra loads of love & happiness for life

If reports about Priyanka Chopra and Nick Jonas' engagement are true, they will be the latest to join the spate of quickie engagements in Hollywood over the past couple of months. Earlier this month, teenage heartthrob Justin Bieber got engaged to model Hailey Baldwin after a proposal in the Bahamas. Justin has famously dated a string of girls but the most shipped one was his blow-hot-blow-cold relationship with singer Selena Gomez. They dated off and on for years, most recently at the start of 2018. Justin has also known Hailey for years and the couple briefly dated in 2016 before finally coming together in June 2018. Justin confirmed their engagement 2 weeks ago with a mushy caption on Instagram.

Was gonna wait a while to say anything but word travels fast, listen plain and simple Hailey I am soooo in love with everything about you! So committed to spending my life getting to know every single part of you loving you patiently and kindLY. I promise to lead our family with honor and integrity letting Jesus through his Holy Spirit guide us in everything we do and every decision we make. My heart is COMPLETELY and FULLY YOURS and I will ALWAYS put you first! You are the love of my life Hailey Baldwin and I wouldn’t want to spend it with anybody else. You make me so much better and we compliment eachother so well!! Can’t wait for the best season of life yet!. It’s funny because now with you everything seems to make sense! The thing I am most excited for is that my little brother and sister get to see another healthy stable marriage and look for the same!!! Gods timing really is literally perfect, we got engaged on the seventh day of the seventh month, the number seven is the number of spiritual perfection, it’s true GOOGLE IT! Isn’t that nuts? By the way I didn’t plan that, anyways My goodness does feel good to have our future secured! WERE GONNA BE BETTER AT 70 BABY HERE WE GO! “He who finds a wife finds a good thing and obtains FAVOR from the Lord!” This is the year of favor!!!!

Before that was the engagement that started it all; that of singer Ariana Grande and Saturday Night Live star Pete Davidson. Although they first met on the sets of the TV show in 2014 and 2016 when they were in separate relationships, they have been romantically linked since May 2018. Since then, they were spotted together numerous times, got tattoos of each other, moved in together and Pete confirmed their engagement to TV host Jimmy Fallon on The Tonight Show With Jimmy Fallon in June.

We're raising our glasses to the happy couples. You know what they say - when you know it, you know it.