Nothing Comes Between Kajol And Her Love For Red Sarees 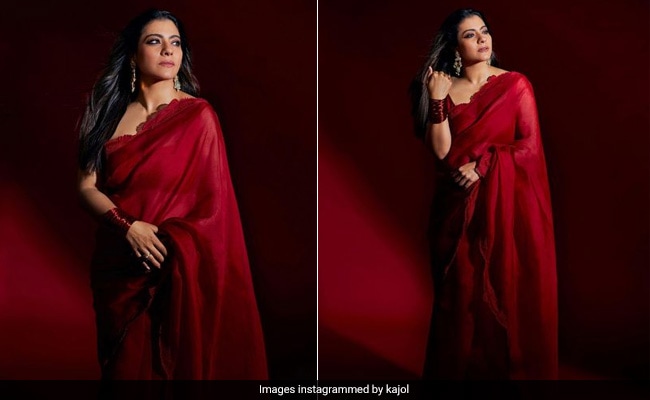 Kajol and her red sarees are a match made in heaven

Kajol and Vishal Jethwa starrer Salaam Venky's trailer is making all the buzz on the Internet. Fans are looking forward to watching the emotional tale of a mother and son, on the big screen. The film is slated to hit the theatres on December 9. Ahead of the trailer launch, Kajol had also treated us to oh-so-gorgeous pictures of herself. Decked up in six yards of grace, the actress looked bewitching. She draped herself in a red ethnic wonder, and teamed it with a sleeveless blouse, featuring a scoop neckline. Kajol wore a handful of red bangles, as well as a pair of silver earrings.

Also Read: Kajol Looks Traditionally Gorgeous In A Yellow Saree With A Gajra In Her Hair

Kajol's saree collection is totally enviable. For the Diwali 2022 celebrations, she picked a stunning pink number from the shelves of celebrity fashion designer Manish Malhotra.  The drape came with ruffled and scalloped detailing at the borders. For accessories, Kajol picked a three-layer necklace. With her locks tied in a pony, she opted for a dewy makeup consisting of highlighted and blushed cheeks along with a pink lip.

When decked up in a gorgeous saree, Kajol doesn't mind being in the spotlight. The actress looked breathtaking in this sequin ethnic wonder. The silver drape came with black borders, and Kajol picked a similar black sequin blouse to compliment the attire. For accessories, she wore only a pair of silver danglers. Makeup? Check. Hairdo? Check.

Shining brighter than the sun is Kajol in a sunshine yellow silk saree, gracefully draped over her shoulder. She opted for a traditional gold choker necklace which matched the tones of her look. She adorned her bun hairstyle with a white gajra. And, that radiant and naturally glam makeup sealed the look.

Kajol is the epitome of pure glamour and grace. Here, the actress wore a peach-coloured silk saree with a subtle print all over. To complement the simplicity of the minimal look, she picked a pair of bold jhumkas. The nude and minimal makeup with a peach lip colour was a match with the traditional wear.

Which of Kajol's saree looks is your favourite? Let us know in the comments.

Also Read: Kajol Is The Stylish Lady In Red In A Gorgeous Prabal Gurung Gown