Sonam Kapoor Proves You Can't Go Wrong With A Black Dress, Baby Bump And All 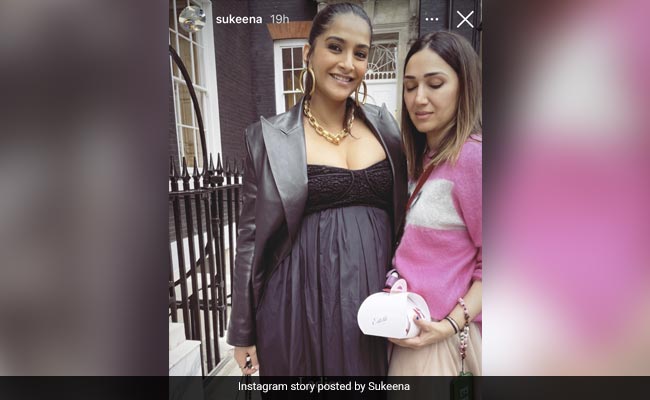 The pregnancy glow looks beautiful on Sonam Kapoor. The actress is expecting her first child with husband Anand Ahuja and is excited about welcoming her baby into the world. However, her chic fashion sense and the ability to pull off a variety of outfits haven't been affected by this phase of her life. Rather, Sonam is busy inspiring trends and looking like an ever-stylish mom-to-be as far as maternity fashion is concerned. Her pregnancy photoshoots often get her fans excited about her impeccable taste in fashion. Recently, she was seen acing a classic black gown while flaunting her baby bump. To add more zest to her clothing, she added a matching black jacket on top. Her gown with a plunging neckline added a bold touch to her look. She picked a statement golden neckpiece and earrings from the accessory department. She tied her hair in a ponytail.

(Also Read: Sonam Kapoor Is A Sheer Beauty And Nothing Else In A Black Mesh Kaftan)

Sonam Kapoor is unbeatable and nothing can stop the diva from putting her best sartorial foot forward. The last time we saw her showcasing her baby bump was when she was dressed in a stylish black kaftan. She wore a long black see-through embroidered kaftan along with a black bralette beneath. The classic number had scalloped lace borders. She adorned herself with earrings. Smokey eyes and tinted lips gave the final touches.

Sonam Kapoor had also shared pictures from various maternity photoshoots with her husband Anand Ahuja. Keeping in mind the ongoing summer days, Sonam opted for a simple yet classy maxi dress in silk organza fabric. Her lemon hues outfit showcased a plunging square neckline and tie-knot details in front. The actress ditched accessories and allowed her outfit to do the talking. Anand chose to keep it minimal in a monochrome look in pastel blue colour.

How can we discuss Sonam Kapoor's style statements and not mention her contemporary looks? Choosing an ethnic route, she draped a stunning wraparound white statement saree by Abu Jani-Sandeep Khosla. With that, she went for a bandeau-style strapless blouse. Her ethnic wonder had embellishments and a thigh-high slit in the front. The actress picked traditional jewellery and wore bold smoky eyes, thus, giving us cues on how to amp up a traditional look with a couple of extra notches.

Sonam Kapoor is trying out every possible style as far as her maternity looks are concerned. She dazzled in a bright cobalt blue laidback version of a pantsuit paired with a plain white tee inside. Subtle makeup and her hair left open rounded off the look. Whereas, Anand Ahuja wore an oversized shirt with khaki trousers.

Sonam Kapoor, we are always taking notes from you.

(Also Read: Even We'd Mistake Sonam Kapoor In A Magical White Saree To Be A Painting)