For Nadiyon Paar, Janhvi Kapoor Drips In Gold In A Sparkly Fusion Lehenga

There is no stopping Janhvi Kapoor from shining bright in her look for her recent song release, Nadiyon Paar. 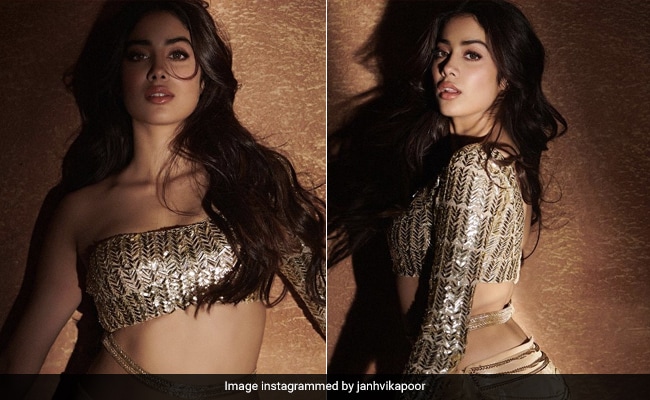 Bollywood is obsessed with all things sparkly and golden and Janhvi Kapoor's latest look is proof is that she is far from over with this obsession. In her latest song release Nadiyon Paar from her upcoming film Roohi, Janhvi Kapoor sets our screens ablaze in her drop dead gorgeous look. Glistening like gold, Janhvi Kapoor's Manish Malhotra ensemble was all the sparkle we needed to do away with our midweek blues. The sequinned one-shoulder blouse featured one of the season's hottest trends – waist flossing, i.e., straps twisting around the waist. Janhvi Kapoor notched the oomph meter further with her glamorous skirt with a thigh high slit on the side. The perfect high glam makeup and loose waves made her an absolute stunner.

Also Read: Janhvi Kapoor, In The Song Panghat From Roohi, Is Setting The Makeup Bar Higher

Swirlster Picks Golden Lehengas For You

Janhvi Kapoor often goes back to black but never without leaving a little sparkle along the way. Janhvi Kapoor has been upping the style quotient for her movie promotions and for her upcoming film Roohi, she makes an impression. Styled in a David Koma gown, her sparkly bustier top makes her simple gown look oh-so-chic.

Also Read: Janhvi Kapoor Is A Sight To Behold In A Glamorous Thigh Slit Black Dress

Known for her quirky 90's style, Janhvi Kapoor channeled her inner 90's baby yet again for Roohi's promotion. She paired a sparkly backless top with a pair of high-waisted bright pink trousers that added the right colourpop to the outfit. Her 90's popstar inspired outfit brought out not just the 90's baby in her but us too!

Also Read: Janhvi Kapoor Gives Us A Dose Of Glam In This Stunning Backless Look

A little neon love never hurt nobody and Janhvi Kapoor is surely the front runner of neon aesthetics for her movie promotions. Seen in a neon high-low dress, Janhvi Kapoor's look was as glamourous as can be. Perfect to make heads turn, trust nobody but Janhvi Kapoor and her eclectic neon style.

To get shopping like your favourite celebs, head to NDTV Shopping.