On Mouni Roy's birthday, we look at some of her best ethnic looks that just goes to show why we pick them over her many stylish avatars 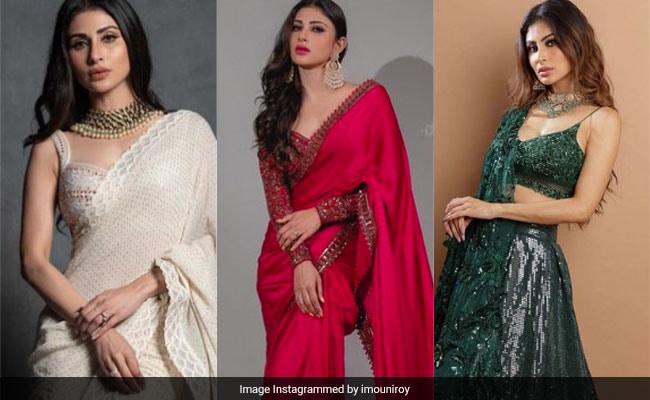 Happy Birthday, Mouni Roy. From the TV world to the silver screen, Mouni Roy's journey has been remarkable. Her recent appearance in Ranbir Kapoor and Alia Bhatt's Brahmastra as Junoon has created a different fan base altogether. Playing the main antagonist of the fantasy world created by Ayan Mukerji, it is safe to say that Mouni pulled off her role in the very best way. But not just acting, Mouni brings her A game when it comes to fashion outings. While she looks her stunning self in any and every ensemble, we are simply obsessed with her desi fits. The actress makes festive styles even more appealing with her diverse choices.

Mouni Roy exudes only elegance as she slipped into an enthralling ivory lehenga. She wore a sleeveless blouse, which featured sequin embroidery and intricate Chikankari work. Mouni teamed it with a self-embroidered skirt. To accentuate the ethnic look, from the shelves of The Clothing Rack, Mouni added a beautiful dupatta that came with golden work. Her manes were tied in a sleek bun and adorned with gajra. Mouni made no compromise on the accessories. Golden necklace, earrings, and a maang tikka studded with green stones went very well with her look.

Mouni Roy is particularly fond of ethnic looks and of them all, the saree might just take the cake away. Looking ravishing in this sequin number, Mouni Roy made it clear that she is a “saree girl forever.” And, we love it. The diva wore the shimmery drape, from the designer label of Rimple and Harpreet Narula, with utmost style. Ditching the accessories, Mouni left her manes loose in soft waves.

Mouni Roy's traditional outings are a treat to sore eyes. Here is another fine example. The actress looks gorgeous as ever in this white and golden sharara set by the designer Masaba Gupta. The outfit featured a white sharara set which came with golden gota work all over. Mouni adorned it with a black duppatta with similar gota work in golden colour. She completed her look with big jhumkas and a statement ring.

Also Read: Mouni Roy Blossoms With Grace For The Festive Season In A Beautiful Floral Lehenga

Mouni Roy in this sea green salwaar kameez set, from the fashion clothing brand Ambraee, is a breath of fresh air. The kameez came with a golden gota border around the full-sleeved wrist, and she wore straight pants to go along. Adding a colour pop to her outfit, she carried a baby pink colour net duppatta. Mouni Roy accessories her ensemble with golden jhumkas and subtle makeup, basking the neutral tones like a pro. Her middle-parted tresses were left loose. Bookmark this look for Navratri pooja.

Mouni Roy can drape the ethnic wonder in almost every way possible. The actress gave an indo-western touch to the striped number, which showcased shades of beige and brown and had a black and white patti border. Mouni Roy gave a classy look to the printed saree from the designer label of JJ Valaya, with a statement belt. Her heavy oxidized jewellery and sleek hairdo is faultless.