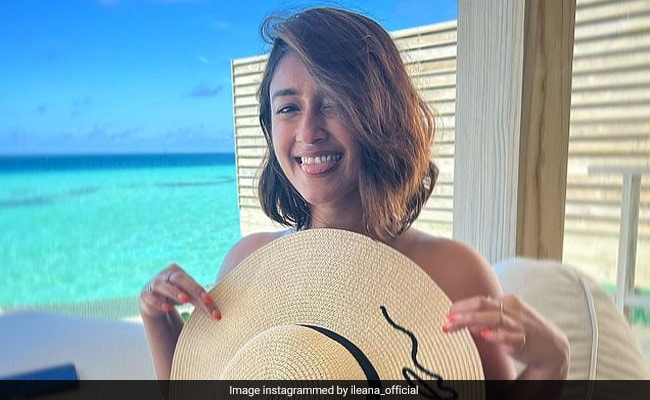 Ileana D'Cruz has had the most glorious year-end. After it came to close in one of the world's most beautiful locations in Maldives, the Bollywood actress has spent the beginning of it working out and rejuvenating. She also reminded us of the wonderful days gone by with her delightful travel photos. In her latest, Ileana is seen posing in front of a blue skies and azure waters. Covering her is nothing but an oversized straw sun hat. With a black band and embroidered text that says 'do not disturb' over it, Ileana sums up the meaning of holiday chic. We couldn't miss a glimpse of her lavender outfit, orange manicure and hair worn in a short wavy bob.

When she bid the old year goodbye is also when we got a clear look at her pastel beach outfit. Ileana picked a strapless bikini with a tie-front detail which was teamed with a matching pair of high waist bottoms which also had a tied detail at the waist. Over it was a lavender coloured cape worn over her shoulders. Accessories for the star saw her wear white frame cat eye sunglasses with hoop earrings as well as a wrist full of bangles.

There was also the time she basked in the December sun wearing a light blue bikini look. Featured her sunkissed glow and a chain harness worn over her body across the front, Ileana captioned this one, "There's no better feeling than baking in the sun and then dunking yourself in the cool serene blue ocean." With a side of style, there really is no better feeling.