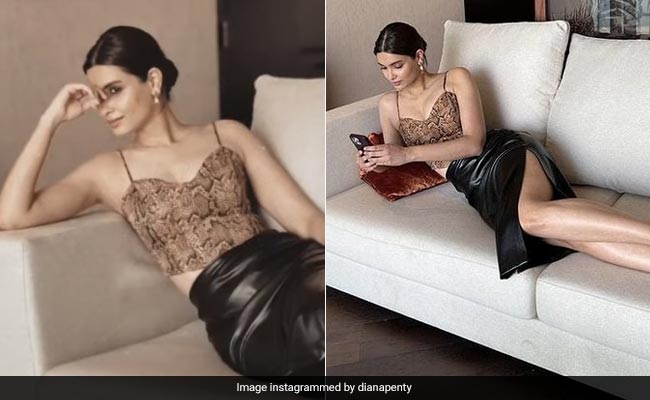 Making a strong case for elegant and chic fashion, Diana Penty is again ready to become a runway queen this new year. The actress is all set to blaze in her fashionable clothes. Recently, she chose a strappy animal-print top and a faux leather black skirt. The skirt featured a side slit that flattered Diana's slender legs. She looked sleek while posing in her high-waist midi skirt. The top had an asymmetrical hemline that gave the actress an edgy look. The top's sweetheart neckline also accentuated Diana's collar bones. She complimented her look with golden minimalist earrings and a sleek hairdo.

Diana Penty loves to keep it subdued while making major style statements. She took a step towards minimalistic fashion with a navy blue denim corset top. She balanced the vibrance of the bright colour with a pair of straight-cut high-waist trousers of a nude shade. She wore golden loop earrings to complete the look.

For Christmas, Diana Penty amped up her fashion game in a shimmery outfit. She posed in a festive glittery co-ord set. She picked baggy pants that were tapered at the ankle with ribbon detail. She paired it with a shirt that featured billowy sleeves. We loved the sequin details all over the outfit.

Diana Penty nails casual fashion in the best ways possible. She proved it to us when she wore tattered denim jeans with a light green sleeveless crop top. She carried a white jacket with her and paired her ensemble with white chunky shoes. Her sunglasses heightened her appearance.

Diana Penty's fashion diaries are too relatable to ignore. She doesn't mind posing for the lens in peppy and cute leisurewear. We knew it when we saw her photos in a pink-and-green top and coordinated shorts. The frilled hemline of her shorts and the side knot of her top gave us lazy weekend vibes. Take a look at her photos:

We are definitely stealing some of Diana Penty's looks to heighten our fashion game.

Also Read: Back When Diana Penty Took On The Hot Summer Days In A Blue Cutout Swimsuit