In A Cutout Dress And Thigh High Boots, Kriti Sanon Is Turning Heads With Her Take On Autumn Style

Kriti Sanon gives autumn a neon pop like absolutely no other 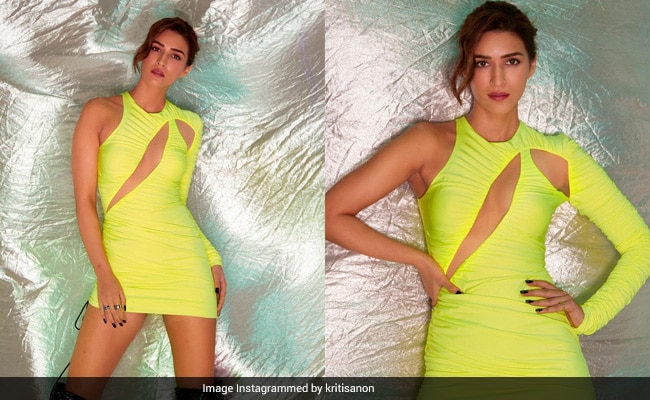 Kriti Sanon is the queen of our hearts and for all the right reasons. Be it her bewitching looks, flourishing art or her style game, we don't know how, but the actress nails every task like a pro. Currently, Kriti is awaiting the release of her horror comedy film, Bhediya, which also stars Varun Dhawan. While the duo are on a movie promotion streak, Kriti is showing us how she is styling autumn fashion in her own unique way. The actress wore a fluorescent yellow ruched mini dress which featured a slit across the torso and shoulder with a single long sleeve and a sleeveless one on the other. Paired with it were glossy black thigh high boots while Kriti finished the look with neutral toned makeup and an updo hairstyle.

For a recent appearance on Indian Idol, Kriti picked a colourful ethnic wonder. The saree came with prints in yellow, black, pink, and orange on a base of white. She teamed it with a strapless black and white blouse. Kriti wore a pair of diamond studs, a couple of rings, and a bunch of black and white bangles for accessories. She opted for a clean girl makeup look, with subtle eye shadow, a light pink tint on lips, and nicely done brows.

(Also Read: Kriti Sanon In A Vibrant Abstract Saree Is No Less Than A Walking Piece Of Art)

The festive season is long over but Kriti Sanon in a black sheathed saree from Dilnaz Karbhary says that it “still feels like Diwali.” Her six yards of grace featured sparkling sequins and embellishment, which gave it a glamorous touch. The halter neck blouse showcased a shimmery golden detail. For accessories, she had a choker set and bangles. Leaving her straight hair open, Kriti went with kohl-rimmed eyes and pink glossy lips.

Kriti Sanon draped an embellished gold saree with shimmery details all over, which only added more charm to her traditional avatar. She picked a matching full-sleeve blouse. Kriti wore stud earrings, kohl-rimmed eyes and nude lips with a sleek hairdo to add finesse to her look.

Nobody romances saree, the way Kriti Sanon does. Here is more proof. Kriti opted for a white drape which came with a big gold flower design at the border. To amp up her style statement, she opted for a pair of gold earrings, statement bangles, and a few rings. Her makeup was glamorous and her locks were left open.

While promoting her film Bachchhan Paandey, Kriti Sanon gave us one too many memorable saree looks. This floral saree is one of our favourites. Kriti draped herself in a rosy pink saree with macro floral details. It also featured a minimal black lace border. The sleeveless blouse came with a deep scoop neckline. Her sleek bun hairdo was adorned with red roses.

We would steal Kriti Sanon's saree collection, any day.