When it comes to setting sister style goals, no one does it Sonam Kapoor and Rhea Kapoor

Bollywood may be packed with plenty of sister pairings but there's no one quite like Sonam Kapoor and Rhea Kapoor. While one dazzles the camera, the other crafts the look that makes it possible. And when they both step in front of the lens in their ethnic best, they are simply beyond compare. Rhea Kapoor married Karan Boolani this weekend in an intimate ceremony which was held at her residence. Along with close friends and family, sister Sonam was in attendance with husband Anand Ahuja. While they got the cameras clicking at the venue, Sonam has now taken to Instagram to celebrate their sisterhood. In the photo, Rhea is seen sitting in her ivory and gold toned saree with a veil over her head and opulent gold jewellery. Sonam protectively stands over her while wearing a pastel toned salwar suit with a striking ethnic jewellery set. She captioned it, "Side by side or miles apart, we sisters will always be connected by heart. Honoured to be the sister of the most beautiful bride. Love you. @rheakapoor". When it comes to setting sister style goals, no one does it Sonam Kapoor and Rhea Kapoor. 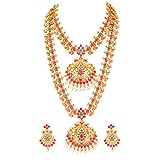 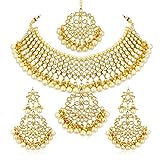 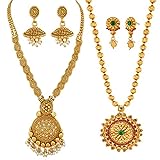 (Also Read: With Husband Karan Boolani By Her Side, Rhea Kapoor Is An Elegant Bride In An Ivory Saree)

Rhea is also known as the fashionable force behind many of Sonam's sartorial statements as her stylist. So you can imagine her own bridal attire would be unlike anything you've seen before. She chose an understated saree from Anamika Khanna which was layered with a cape on her shoulders.

Rhea's very unique accessory was a vintage pearl veil by Birdhichand. The most treasured part of her wedding look would definitely be her striking jewels which were from the most special lady of them all, her mom Sunita Kapoor.