In Her Winter Best, Sonam Kapoor Makes The Airport Her Personal Runway

Certain things come naturally to some celebrities, like Sonam Kapoor's showstopping moment at the airport 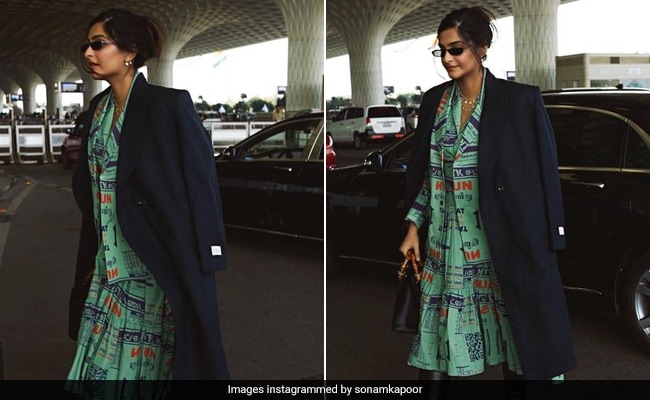 Sonam Kapoor carries the weight of being the most fashionable Bollywood celebrity. We'd say ever, but then that'll ruin the fun of what's in store for us brought to us by her ahead. Everything and everywhere has fashion potential that only Sonam Kapoor and her style crew have the potential of tapping. Airport terminals are anyway the chicest Bollywood hotspot. But when Sonam Kapoor turns the airport to her personal runway, you can't miss out on this showstopping moment even if you tried. As Sonam Kapoor proceeded to the launch of Nike's largest flagship store in the capital city, she picked a graffiti pleated dress with a matching blazer from homegrown label Doh Tak Keh and layered it on with the winter favourites to bring in the Indian winter in style. The outfit was layered with a black trench worn over her shoulders and that's a boss babe move we could never ace.

God is in the details or maybe that's just her stylist, sister and best friend, Rhea Kapoor's eye for it to make each and everything look perfect. What's a Delhi winter without long leather boots? A very boring in style one that's for sure. Other black accessories to match the trench coat were her Gucci Diana handbag and micro sunglasses that bound the look together. The hair tied in a bun with strands on the side, an autumn rust lip and her signature minimal glam looked after the beauty department.

Sonam Kapoor arrived at the event in her phenomenal style but we couldn't help but notice her delicious arm candy, the gold Rolex President watch. The former IWC Watches brand ambassador sure knows her time is never wasted.

Baby Vayu, we just know you'll be the most stylish kid with mommy Sonam around.