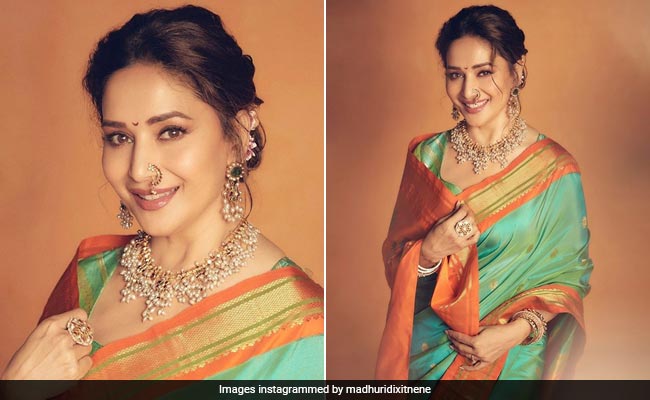 Madhuri Dixit Nene and sarees are a match made in heaven. The stunning actress was recently seen in a traditional saree and sent fans and followers into a tizzy with her Indian look. The actress seemed to be channelling the Maharashtrian in her with the teal and orange silk saree designed by Madhurya Creations. She coupled the saree with a traditional Maharashtrian nath, adding a personal touch to the look. She uploaded the photo on Instagram and added the caption, “Keeping it ethnic.” For her jewellery, she went for traditional designs and added a Maharashtrian half circled maroon bindi to complete the look. Her makeup was simple and understated. The dewy makeup added a glow to her face and brought the look together.

We recently also saw her in another Indian look that won us over in a second. She was seen in a beautiful deep pink sharara set by Punit Balana, looking lovely as ever. The sleeveless kurta with elaborate embroidery was paired with a sharara of the same colour and a simple dupatta.

Madhuri recently also rocked another Punit Balana creation. This time she was seen in a pre-draped concept saree in turquoise. The pre-draped saree was paired with a blouse that had both, mirror and thread work. It featured an organza silk pallu as well as a cutwork belt. For jewellery, she chose to go with silver and gold jewellery and was seen wearing bangles, rings, and a necklace.

Another time, she showed us how to wear an outfit like a diva when she was seen in Karan Torani lehenga. The lehenga featured intricate handwork all along the voluminous skirt as well as the blouse that featured floral work.

We think Madhuri Dixit looks like a queen in whatever she wears. Which of these looks is your favourite?

(Also Read: Madhuri Dixit "Decides Her Vibe" And To Nobody's Surprise It Was A Gorgeous Saree)