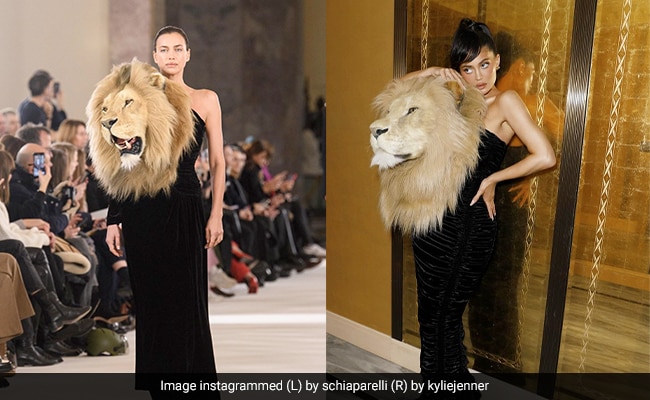 Paris Fashion Week 2023 certainly turned out to be more statement-making than we expected and from amongst the numerous designers that showcased, Schiaparelli outshone them all. The French haute couture house showcased their latest line at Petit Palais, which was themed around Dante's Inferno, the first part of his epic that details his journey through hell. The fashion quotient saw muted hues of mainly black, beige, gold and white cascade down the catwalk in many unique forms, from beaded jackets and pinstriped suits to oversized gowns and sheer paneled dresses. In their caption, Schiaparelli spoke of the collection, saying, "Inferno, Purgatorio, Paradiso: One cannot exist without the others. It is a reminder that there is no such thing as heaven without hell; there is no joy without sorrow; there is no ecstasy of creation without the torture of doubt."

(Also Read: Irina Shayk Stuns On The Beaches Of The Bahamas In A Fabulous Patterned Swimsuit)

Then came the time when supermodel Irina Shayk walked down the runway and that's when we did a double take. Irina wore a black midi dress which was accented with the hyper-realistic bust of a lion draped across her chest. Also on the runway was Naomi Campbell in a black long sleeve coat with the bust of wolf on her shoulder and a third model wearing a spotted grey dress with the bust of a snow leopard, bang in the centre. Though they appear extremely life-like, the busts of the wild animals were man-made, hand-sculpted and did not harm any animals in the process. The designer says in the caption, "The leopard, the lion, and the she-wolf-representing lust, pride, and avarice in Dante's iconic allegory - in hand sculpted foam, resin, wool and silk faux fur, hand painted to look as life-like as possible."

While Doja Cat in her own fiery red crystal-studded Schiaparelli look sat in the front row for the showcase, so did Kylie Jenner, only a few seats away from her. Paying tribute to the designer, Kylie Jenner wore the very same black dress Irina Shayk showcased, complete with the lion bust across the chest. It was almost as if we were staring into a very strikingly stylish look to see both versions of the same look, right as it made its debut.

Kylie wore her hair in a sleek high ponytail with the outfit along with muted makeup. She carried a metallic purse in her hand and completed the outfit with black heels. On her outfit, the caption by the designer says, "Embroidered Lion in hand sculpted foam, wool and silk faux fur, and hand painted to look as life-like as possible, celebrating the glory of the natural world. Nothing is as it appears to be in Schiaparellis Inferno Couture..."