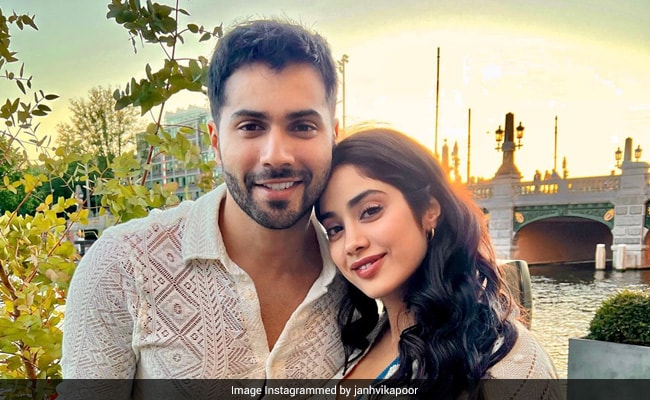 Crochet is one of the most popular trends of the season and Bollywood is equally obsessed. The intricate knit is the perfect summer addition no matter which corner of the world you may be in. Amsterdam included. And if you needed a reason to believe it then you're in for luck because we're here to give you not one but two - Janhvi Kapoor and Varun Dhawan. It may not be sunny in Amsterdam but it sure looks bright in their matching outfits of the day. All-white and in easy breezy white crochet tops are their stylish choice of clothing. Varun Dhawan pairs a loose fitted pair of trousers with his crochet white shirt and Janhvi Kapoor picks a white crochet crop top to go with her trousers. Janhvi Kapoor's blue Goyard sling bag makes a splashing entry to her white look almost seamlessly. The duo wrap up the Amsterdam schedule of their shoots and we're sure it was quite the Bawaal. Poland, you better watch out.

Janhvi Kapoor has been having a pretty gala time in Amsterdam. Lunches, brunches and every other stylish meal she could squeeze in were done in her very casually styled self. Dungarees make a return and we're sure you know who is responsible for it.

During holidays Janhvi Kapoor's summer style is at her peak. Dresses especially make the most of her summer holiday closet. Floral cami dresses can put even the most gorgeous backdrop of Berlin to shame with ease.

Janhvi Kapoor at the end of the day doesn't always need a dress to have a great summer. Give the girl a pair of jeans and the right excuse to beat the blues in style, and watch her go places, literally!