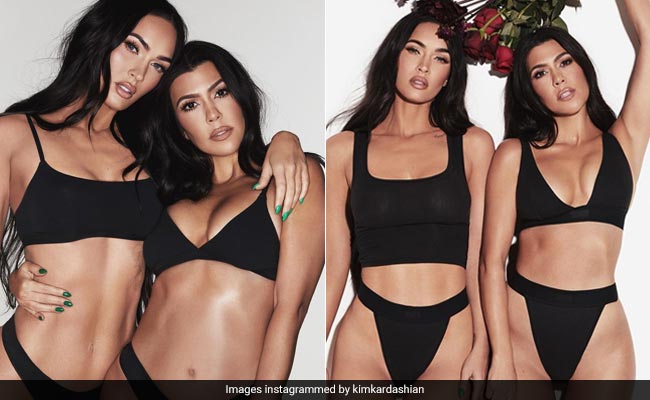 We don't know about you but somehow we were expecting this day to finally arrive when Kourtney Kardashian and Megan Fox collaborate on something fantastic. And to believe it was going to be a lingerie campaign comes as no surprise either. Kim Kardashian found just the right opportunity to delve into her sister's new found friendship and ran with and the outcome is just the usual internet coming to an absolute shutdown. The pair posed in basic black cotton sets followed by ivory ones as well in their photoshoot. The bronzed makeup overload and the long black locks only add to the beautiful twinning moment they're both having. Fans, we need fans because there is no way on earth we're dealing with these soaring temperatures without one.

Also Read: Megan Fox's Dress Is "Sheer" Bliss With A Very Chic Bold Twist To It

If the VMAs weren't reason enough to believe that there was something brewing between them then you're probably living under a rock. We'll happily oblige in showing you how they slayed phenomenally on the red carpet with their respective "future baby daddies".

Kourtney Kardashian dressed perfectly for leather weather in a lace-up black dress as she walked in hand-in-hand with boyfriend Travis Parker.

Megan Fox left little to one's imagination for the VMAs in a sheer Mugler dress with a corseted crop top and a metallic bikini bottom. Boyfriend Machine Gun Kelly wore a sequined red suit as they packed in on the PDA per usual.