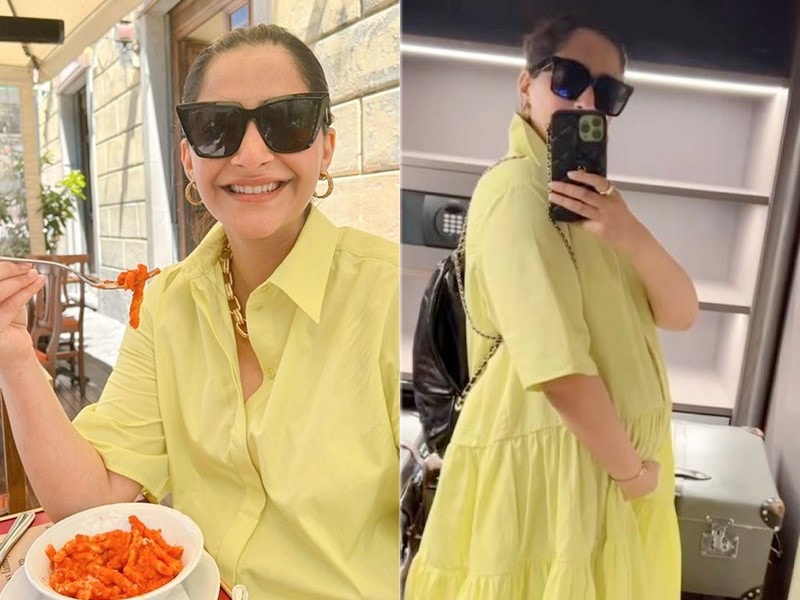 Sonam Kapoor is a true fashionista and has gotten us hooked to her stylish wardrobe ever since the beginning. The actor is now giving some major maternity fashion goals with her spectacular wardrobe as she welcomes the new phase in her life. The soon-to-be mommy wears comfortable yet chic outfits and shows us how to keep the fashion game on point, always! This time Sonam posted pictures on Instagram in a yellow maxi dress and looked summer perfect. The collared button down short-sleeved maxi had layered ruffle detailing at the front. The actor complemented her monochromatic look with black sneakers, golden hoop earrings, choker necklace and black sunglasses. Tying her mane in a sleek bun, Sonam wore minimal makeup with nude lip colour. 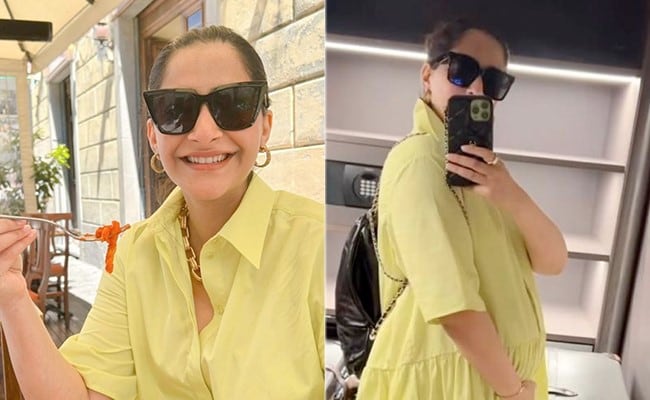 Sonam Kapoor is looking radiant like a ray of sunshine

Sonam Kapoor has delivered some stunning maternity outfits ever since she announced her pregnancy. For a photoshoot, the actor wore a stunning all-black ensemble. Sonam wore a long see-through kaftan with delicate embroidery and lace detailing. The actor wore a black bralette beneath the kaftan. The lace detailing at the neckline, sleeves and hemline added a glam quotient to the monochromatic look. Sonam picked golden hoops to go with the dress. She wore glamorous makeup with defined eyebrows, smokey eyes and glossy lip tint.

Also Read: Sonam Kapoor Is A Sheer Beauty And Nothing Else In A Black Mesh Kaftan

Sonam Kapoor also did a photoshoot in some ethnic pieces during the pregnancy which got her fans bowled over. The actor wore a white drape from designer label Abu Jani Sandeep Khosla. For the designer's birthday, the actor wore a stellar wraparound saree and made a bold fashion statement. Sonam's readymade saree had embellishments at the side with a dramatic thigh-high slit at the front. She teamed the saree with a tube blouse. Sonam accesorised the look with bracelets, earrings, rings and a golden neckpiece. The actor left her tresses open and opted for kohled eyes, winged eyeliner, tinted lips and contoured cheeks.

Sonam Kapoor is setting standards for maternity fashion too.