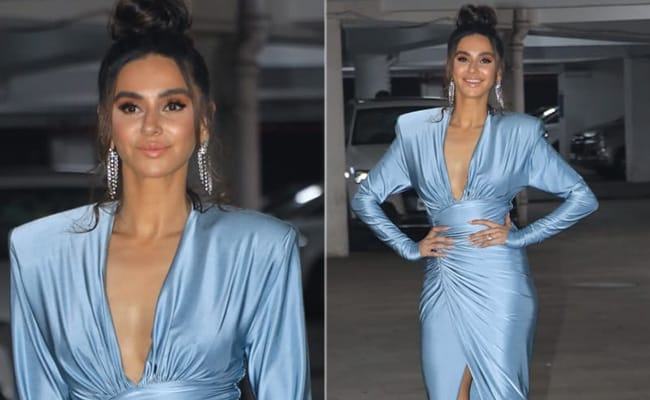 Weddings are a joyous celebration not just for the couple but also for others around them. One has to admit it or else one wouldn't witness such a massive turnout of the biggest names in the film industry for the couple of the moment - Farhan Akhtar and Shibani Dandekar's wedding bash. The party was held at Ritesh Sidhwani's house and while there were many stars in attendance, we were fixated on Shibani Dandekar upon arrival. She showed up as the glummest new bride in town ready to dance the night away in icy blue tones. Her dress was fit for a party like hers with a plunging neckline and a dramatic thigh-high slit on the side. For jewellery, she picked sparkly shoulder dusters for the perfect touch of bling. Her makeup was kept minimal with a dramatic dose of fluttery lashes on fleek and her hair tied neatly in a glamorous top bun.

Also Read: Red Is The Colour Of Love And We Sure Are In Love With Shibani Dandekar's Wedding Outfit Shibani Dandekar at her wedding bash

Shibani Dandekar's wedding album was all things fun and fabulous starting from her bohemian chic mehendi ceremony. Free-spirited in style, Shibani Dandekar's mehendi outfit was an extension of her bridechilla personality. The contemporary sharara set with all its colours, designs and tassels made on it, we bet boho chic dreams are made of this.

Our heart however is and will probably always be stuck at her custom-made lehenga-gown designed by Jade by MK where she ditched the traditional white for a French lace Chantilly crafted in red on beige slip. Her crimson veil had a moment of its own, trailing along the way and giving us all wedding vibes for the offbeat bride.

Shibani Dandekar sets a stylish precedence for the brides who do not conform to the usual.