Sonam Kapoor's ethnic wardrobe will make you stop, stare and take notes for the festive season ahead 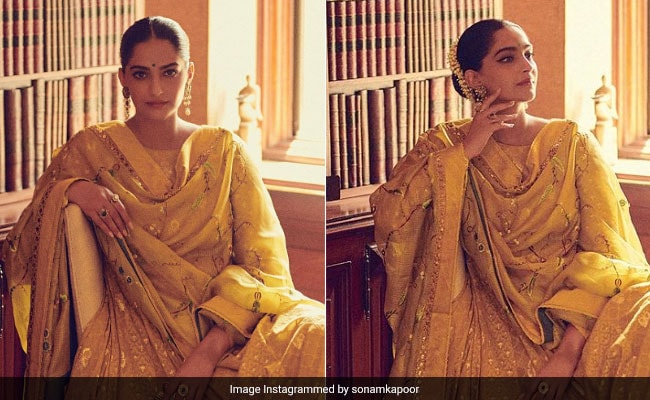 Sonam Kapoor glows with the power of a thousand suns

Sonam Kapoor is hands down the ultimate style icon of Bollywood. Lately, the actress has been treating us with numerous traditional looks. From looking ethereal in a lehenga choli to adding glamour to a regular kaftan, Sonam's ethnic wardrobe will make you stop, stare and take notes. After welcoming her first child, son Vayu with husband Anand Ahuja, Sonam is now getting back to work. While the actress is yet to spill beans about her upcoming projects, she makes sure to keep us hooked to her fashion diaries. Latest update? A stunning yellow anarkali. Sonam slipped into a bright yellow number by designer Gaurang Shah. The outfit came with golden print work all over. She also carried a yellow dupatta laced with mirror work. Dangler earrings, and a bunch of golden rings accessorised her ethnic look. Sonam tied her tresses in a neat bun, adorned with gajra. And, for makeup, her nude tones simply complimented the overall look.

Also Read: Is That A Phone Booth? Because Sonam Kapoor's Ruby Red Gown Is Calling Us

Sonam Kapoor left us stunned with her Diwali look this year. The new mommy in town picked a hand-sewn ghagra-choli set from the shelves of re-ceremonial. Sonam added a colour pop to her otherwise muted look with a gulal zari dupatta. She rounded off her look with traditional juttis, pretty chain earrings, payal and rings.

Thank you, Sonam Kapoor, for reviving our love for easy-breezy kaftans. The actress wore a black kaftan, which came with intricate patchwork and embellishments in a multicoloured pattern. She accessorised herself with a maang tika and dangler earrings. Those smokey eyes simply accentuated the look.

Sonam Kapoor's Karwa Chauth look was a hit among fashionistas. The tussar kantha embroidery lehenga, sporting a Kanjeevaram border, by Gurang Shah looked divine. Sonam paired it with a contrasting green blouse and an organza badla dupatta. Statement necklace, earrings, and bangles for accessories, and a muted makeup completed her ethnic look.

Sorry, but we will never get over Sonam Kapoor's jaw-dropping maternity looks. Especially this off-white chamois satin skirt which was decorated with delicate sequins and pearls. She paired it with a long trailing multi-panelled dress. Sonam's braid was adorned with pearl-attached pins which elevated her maternity look.

We cannot wait to witness some stellar fashion statements from Sonam Kapoor.