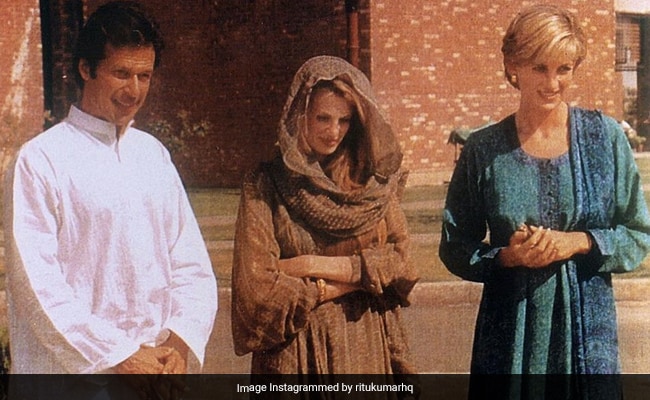 Princess Dianas love for her salwar suits had no bounds

Princess Diana was known for her sartorial style in everything she wore. There was no outfit ever made that she could not handle or do justice to. Even in the midst of her classic dresses and sassy street-style outfits, Lady Diana had a special place for the salwar kameez. She visited Lahore, Pakistan on three occasions - once in 1991 and later in 1996 and 1997 due to her close friendship with the current Prime Minister Imran Khan and former wife Jemima Khan. On one occasion, her outfit choice for her visit included a blue Ritu Kumar salwar suit that stood out on Princess Diana's frame as she posed with both Jemima and Imran Khan and paired matching heels to go with it. Jemima Khan too picked an earthy brown anarkali by the designer for the event.

Also Read: Princess Diana's Most Iconic Looks Of All Times

Designer Ritu Kumar recalls in her latest post how the late Princess of Wales was a patron of the designer's London store and would often cycle down to the store for a private shopping spree. Princess Diana was introduced to the designer by Jemima Khan herself. The famous blue salwar kameez was not the only suit she wore by the designer. Blue was the late princess' favourite colour and she wore many blue suits thereafter too for her Lahore visit along with her pristine whites that were a close second.

Her love for the salwar kameez was far and wide and when Imran and Jemima Khan flew to London in 1996 to attend the dinner at the Dorchester Hotel, Princess Diana wore a beaded and embroidered ivory couture salwar as a tribute to her visit. The dinner was hosted to aid the Shaukat Khanum Memorial Hospital in Pakistan but we had our eyes stuck then and now on this salwar kameez which she paired with a pearl choker, making this one of our all-time favourite looks.

Princess Diana may have aced many classics but her sartorial style and rebellious nature is what stayed on forever to make her become one of the most well-known women history has ever known.