With A Green Blazer, Kiara Advani Adds A Pop Of Colour To Her White Bralette And Denim Shorts 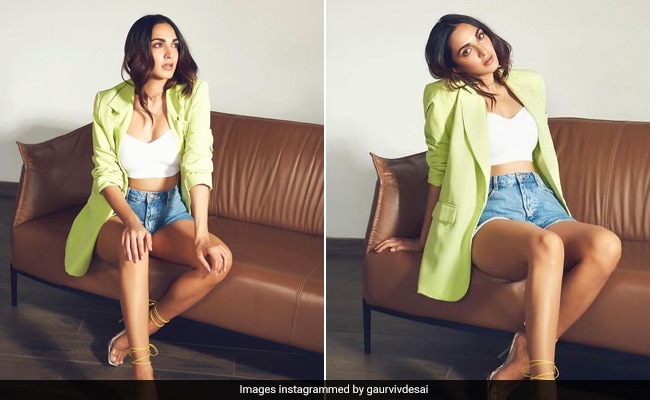 Summer glam is all about keeping it subtle and simple with relaxed silhouettes yet a trendy style. And actress Kiara Advani is definitely keeping her summer style on point in a chic white bralette and denim shorts. The actress has always been known for keeping it trendy while adding a personal touch to it. The diva was seen giving a colourful and trendy spin to basics in a white bralette and chic denim shorts and she added a pop of colour to it as she layered the look with a pretty pastel blazer. Her dewy makeup glam and open tresses perfectly complemented her look, giving us major summer fashion goals! She completed the look with chic transparent heels.

Kiara Advani and her fashion choices have always been appealing. And this time the actress is slaying in a stunning strapless yellow midi as she strikes a pose. The diva was seen adorning a chic yellow midi which featured a side slit. The strapless number was paired with statement earrings and chic nude peep toes. She opted for tied tresses and a dewy makeup look which perfectly complemented her look.

Pretty in pink, actress Kiara Advani is giving us major summer fashion goals in a chic pink co-ord set. The actress paired a crop top with matching bottoms. The chic crop featured ruffle detailing on the sleeves which amped up the dramatic quotient.