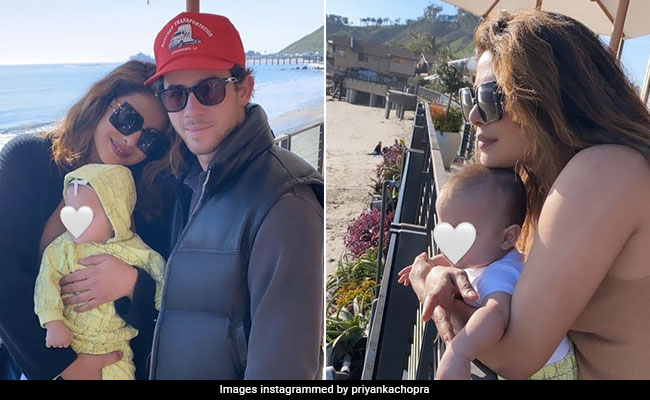 Priyanka Chopra and Nick Jonas' daughter Malti Marie turned a year older this month and it seems like she's already taking up after her very stylish global superstar of a mother. The happy little family has been spending some quiet time together in California. In a series of photos that Priyanka posted on Instagram, the actress is seen in a tan top with blue jeans layered with a black cardigan. Besides her is husband Nick in a grey puffer jacket and red trucker hat. But in this family portrait it was little Malti that stole the show. While her face was concealed with an emoji, the little girl is spotted wearing a pastel yellow coloured Dior onesie which came with a hood. She had white socks and a matching white tee beneath. Malti Marie's designer style is already turning out to be more like Priyanka Chopra's than we ever imagined!

(Also Read: Priyanka Chopra Serves "Weekend Vibes" In Dubai In A Sunshine Yellow Swimsuit On A Yacht By The Sea)

Another adorable family photo of their little family of three sees Priyanka sprawled on the shaggy rug wearing a patterned black, white and green co-ord set. In her arms is Malti, enjoyed the blissful moment of play time while doting dad Nick protectively watches on.

Back in September 2022, Malti took her first trip to New York in the arms of Priyanka Chopra. To watch the busy city go by, the little one was seen in an animal-printed pajama suit while Priyanka wore a pastel patterned co-ord set. Don't mother and daughter look simply adorable together?

(Also Read: Priyanka Chopra In A Cutout Number With A Slit Sure Is One Fiery "Lady In Red")