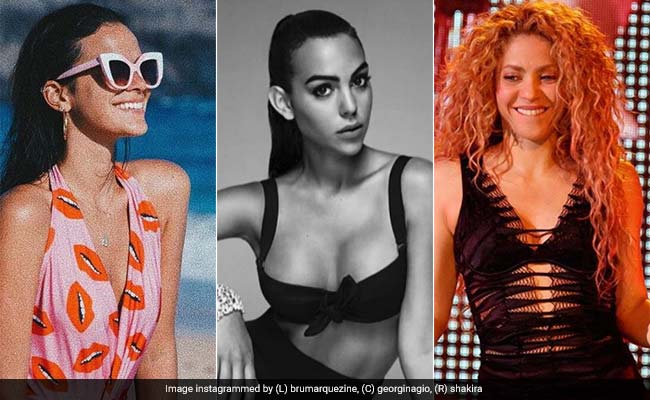 It's football season and if you aren't a fan of a ball being passed on a field for 90 minutes, it may not feel like the best time for you. With FIFA World Cup 2018 season in full swing, football is the world's current obsession. But doesn't mean you have to be left out. As much as the footballers on the field, their wives and girlfriends (fondly called WAGs) are stealing the spotlight off it. Here's a look at seven of the globe's most gorgeous WAGs who are making waves at the FIFA World Cup 2018 in Russia.

You probably know the globally renowned singer already (2010 FIFA World Cup anthem Waka Waka, anyone?) but not as a WAG. She's the most famous one there is and besides Shakira's musical career, she is the longtime partner of Spanish footballer Gerard Pique with whom she has two sons.

The lovely Rebekah Vardy is wife to English player Jamie Vardy who she has children with. She's also a doting mom and loving wife from the stands apart from a stint on I'm A Celebrity Get Me Out Of Here.

Wife to the world famous Argentinian player Lionel Messi, fiercely private Antonella is also mother to his three children. Theirs was a beautiful romance as the two have known each other from childhood and got married in 2017.

The absolutely stunning Clarice is the better half of Brazilian player Marcelo Vieira. Besides that, she's also a trained actress and has experience in muay thai.

Another famous WAG from the football world is Georgina. She's the partner of Portugal star Cristiano Ronaldo and a fashion personality. She has a child with the footballer and they share four children together.

Another beauty the world is going wild for is Pilar. The beautiful Spanish TV presenter is the partner of Spanish footballer Sergio Ramos and the couple have three children together.

The Brazilian model and actress is dating Brazilian footballer Neymar. Bruna is an award-winning actress (who was seen at Cannes 2018) and started out as a child star. The couple have an on-again off-again relationship and are now going steady.

Even if your attention isn't on the field, these ladies are sure to have yours off it.