Dressed In Their Indian Best, Priyanka Chopra And Nick Jonas Had Us At Hello 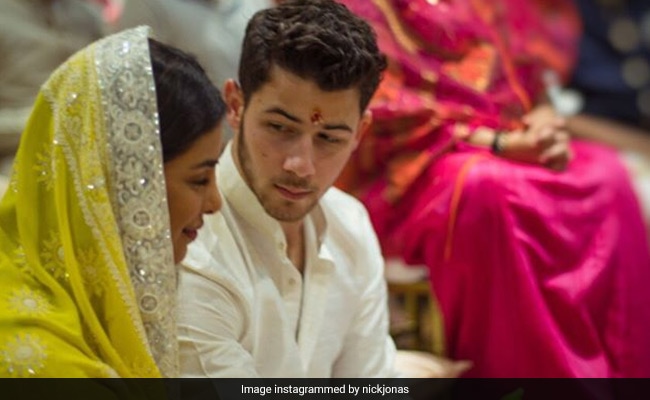 In true Punjabi tradition there was a 'bade' Papa, accompanied and definitely overshadowed by a flamboyant Papa Jonas who surrounded by a frame full of ladies showed how the apple hadn't fallen far from the tree. 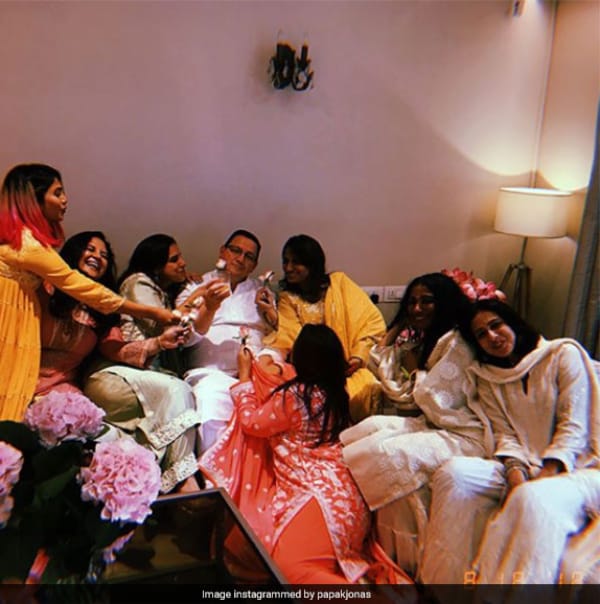 Papa Jonas with family and friends

But son Nick Jonas seems to have been there, done that, as the 25-year-old looked besotted with 'our' PeeCee, enough to sit through a crash course of Indian traditions without crushing much of his ivory kurta pyjama or his patience.

The rings were exchanged, publicly that is. Perhaps it was jet lag or just love but Priyanka Chopra was a tad slow in removing her ring and pocketing it when she landed at the Delhi airport ahead of the ceremony. Moments later, Instagram, the millennial version of a news agency, had called it. On the day though, Priyanka's Abu Jani-Sandeep Khosla lemon outfit was refreshing, not just in colour but also for it's lack of frills and drama. Maybe it was because she and Nick Jonas are almost of similar height but the juttis simply added to the charm. It's how usual folks who have a daytime 'roka' ceremony dress and knowing how hard that is for Bollywood, this was a big thumbs up. But of course, none of us brides-to-be have had the Tiffany store shut down for us by our man as he selected the solitaire!

That's a design, it's a truck logo, no, it's the newly engaged couple's initials in the background as the Chopras and Jonases posed happily together for a photo-op after the puja. Perhaps a bit cheesy for most but combining Punjabi, Priyanka's brand of Bollywood (almost Punjabi) and pop music can't be easy. We have seen worse - who can forget Sonam Kapoor's fur-like extension on her shoulder at her reception? And we live to see more, rumours say that Ranveer Singh's wedding to Deepika Padukone is just around the corner.

But the Indian Twitterati was bowled over and that's no mean feat these days. They were, however, not too impressed by how lovely the Jonas mummy looked in her salwar kameez or sari and instead were thrilled to bits by how the Jonas family was dressed in traditional Indian clothes. Not just that, the singer putting some Hindi into his Insta posts added to that sense of easy victory - they were clearly seeing a different match. Hopefully, they will be just as generous in their acceptance when the shoe is on the other foot and an Indian someday gets married as per firangi customs. Who knows, Priyanka Chopra may yet test them, there is speculation that the wedding will be in Los Angeles.

But for now, the Americans and the Punjabis danced away the night with their friends at the post-engagement party. Cousin Parineeti Chopra needs a stylist or if she has one, needs to sack asap. Nick's filmy-style head moves remind me of a foreign trainer I once had who would keep nodding his head and saying 'acha, acha' as though that was the answer to everything Indian. Maybe, the Jonas jamai is using the same trick to pass through the great Indian wedding tamasha!

Thankfully, the 'age is not just a number' debate has taken a backseat. Sadly for the naysayers, this is inspiring and may yet last, frankly much like the odds for any marriage today. Hugh Jackman did it and decades later is still living happily after but we can always get the age difference between Alia Bhatt and Ranbir Kapoor into the equation if that helps. Didn't see it, you say?

For now, the peeps on social media have enough excitement to look forward to, what with both Priyanka Chopra and Sophie Turner of Game Of Thrones getting married to two Jonas brothers.