How Chikankari Made Its Way To Indian Bridal Trousseau 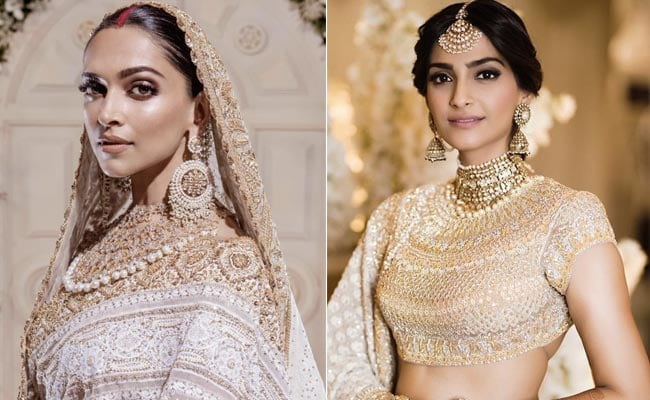 The ancient craft of chikankari needs no introduction. The ethnic wear wardrobes of Indian women have long included outfits showcasing the intricate hand embroidery from the city of Nawabs - Lucknow. While in the past white-on-white embroidery was what everyday casuals looked like, in recent times chikankari has undergone major transformations to match up to other luxurious Indian crafts in finery. It's even gone on to break age-old customs and be the centrepiece in bridal trousseau, thanks to Indian designers who have excelled in reviving chikankari. Forerunners in this league are of course Abu Jani and Sandeep Khosla who have been making a case for chikankari since the early '90s.

When Abu-Sandeep started working on chikankari 28 years ago, their vision was to revive the craft to unimaginable standards of style and finesse. The designers tell us, "We were determined to make chikankari haute couture. To not merely restore it to its Mughal glory but to elevate it to an even higher standard of finesse where it became ramp, red carpet and wedding wear - the epitome and zenith of couture. The purity of white-on-white embroidery, the delicacy of its stitches and jaalis, the history of chikan being the chosen wear of the nobles - all whetted our creative appetite."

"We began our mission and romance with chikankari when we visited Lucknow in 1992. It took two years of intensive R&D and training of artisans before we were ready with a collection. Chikan had been reduced to mass-wear on synthetic fabrics and it lost all connection to its noble origins. Our mission began with retraining block craftsmen, printers and embroiderers to create unparalleled finesse and quality. We also decided to work with the finest luxury fabrics and are the first to create chikan in georgettes, chiffon and silks," say Abu-Sandeep. The designer duo even successfully set a trend for chikankari as bridal wear. Their first bride was Shweta Bachchan Nanda in 1997, who wore a beautiful chikankari ensemble, complete with a heavily embellished odhna. "Our first chikankari bridal ensemble was for Shweta Bachchan, which she wore at her mehendi. It was path-breaking for a bride to wear off-white. It set the trend for chikan brides for decades after," say Abu-Sandeep. 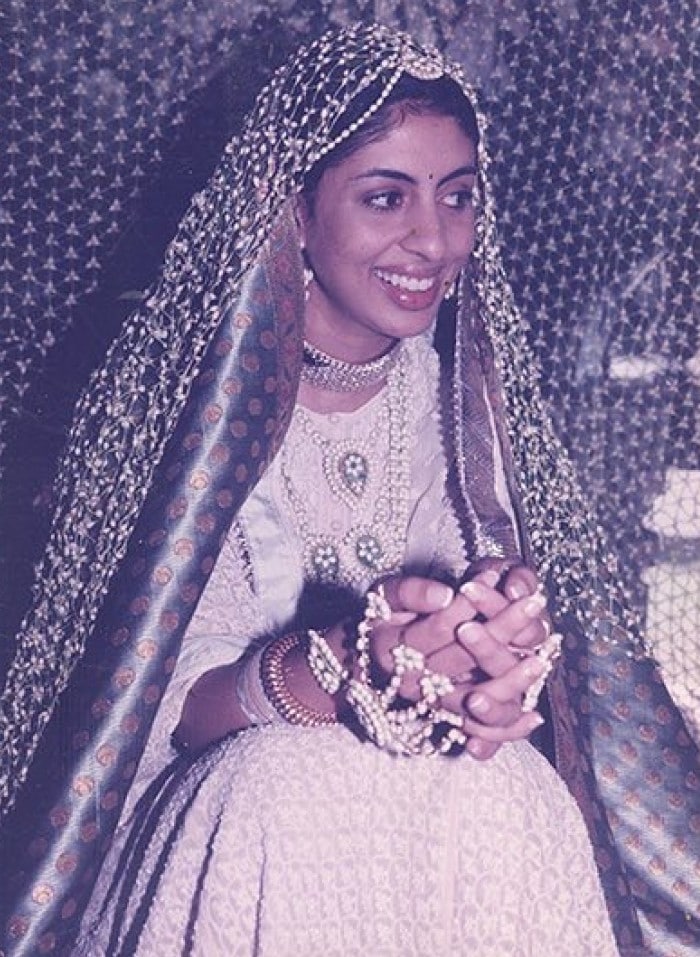 In recent times there are many celebrity brides who have dared to break traditions and pick chikankari outfits in shades of white. A fine example of that is Bollywood star Deepika Padukone, whom Abu-Sandeep dressed in chikankari for one of her wedding functions. They created an ivory and gold chikankari demi-sari for her, which featured a trail and chadar as a head dupatta with dramatic zardozi lace borders. It was further notched up with sequins, Swarovski crystals and gold zardozi embroidery.

Another celebrity bride who chose chikankari for her bridal trousseau was none other than Bollywood's fashion icon Sonam Kapoor. For her mehendi, Sonam Kapoor commissioned a chikankari outfit 2 years ahead of her wedding. Abu-Sandeep say, "Sonam is our absolute favourite and for her wedding it had to be a fantasy piece that set new creative standards for us in order to do full justice to her and this sacred occasion. She ordered her outfit 2 years ago and it took multiple teams of artisans 18 months to complete it."

Sonam wore a multi-panelled chikankari georgette lehenga in off-white and soft pastel hues. Each panel featured a unique set of motifs and all 40 stitch techniques of chikankari were employed.

While Deepika and Sonam picked chikankari for their wedding functions, Priyanka Chopra wore a chikankari outfit during her roka. Created by the same designers, it wasn't a white piece and instead featured a pastel yellow hue.

While everybody wants to wear Abu Jani Sandeep Khosla creations in today's time, the designers are thankful to a few movie stars from the past who contributed in creating quite the buzz about their exquisite creations with modern sensibilities. One among them is their friend and Bollywood actress Jaya Bachchan, who has worn chikankari outfits from their label on various occasions. Such as this look from their archives, where she can be seen in a chikankari saree. 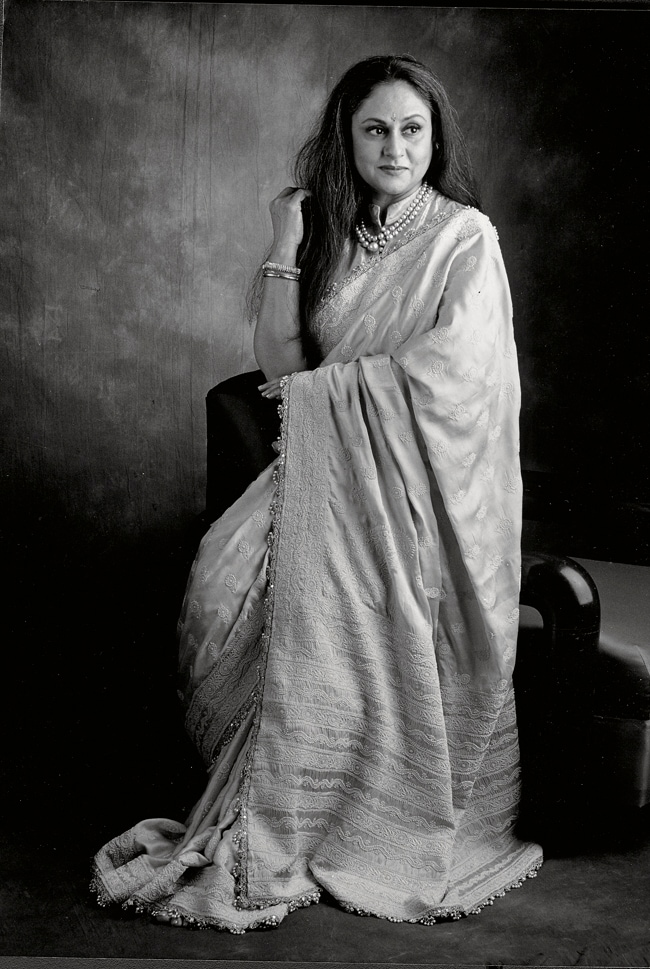 Actress Dimple Kapadia has been a muse for the designers, and she has worn many of their creations - from kurat-sets to lehengas.

Clicked in 1994, here's Dimple Kapadia wearing the iconic first collection of chikankari by Abu Jani Sandeep Khosla. "Our first collection in 1994 was an instant sell-out and chikan became an AJSK Hallmark. It is so gratifying to have put it on the high fashion map. To have made chikan the very standard of couture, red carpet and bridal wear. We are proud to say that this exquisite technique is quintessentially Abu Sandeep," add Abu-Sandeep. 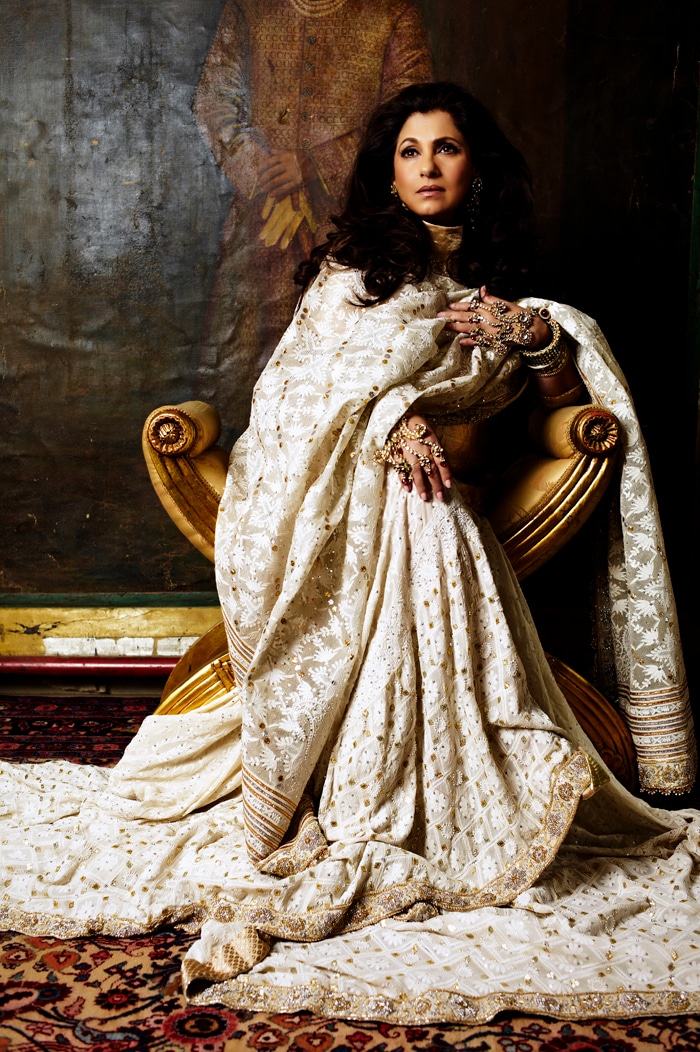 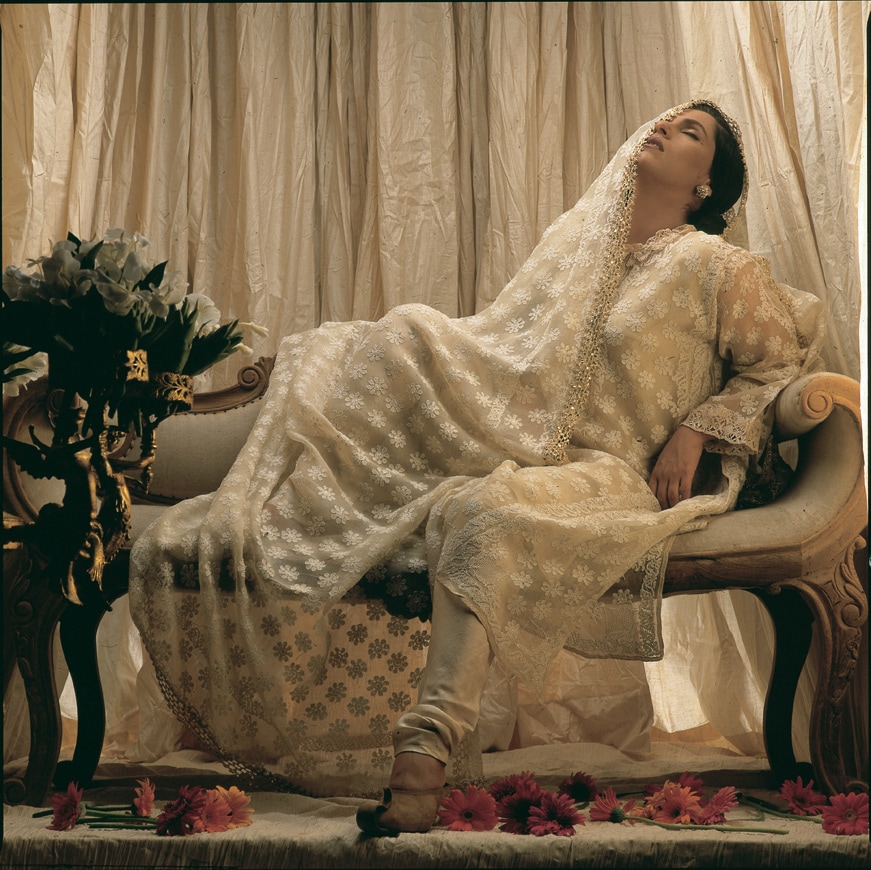 Exclusive with @abujanisandeepkhosla The designers on making chikankari haute couture. "When we started working on chikankari 28 years ago, we were determined to make it haute couture. To not merely restore it to its Mughal glory but to elevate it to an even higher standard of fitness where it became ramp, red carpet and wedding wear - the epitome and zenith of couture." • • To read the full article, log onto www.swirlster.ndtv.com #abujanisandeepkhosla #chikankari #IndianSwirl #lovechikankari #indiancraft #indianwear

Chikankari is forever. Its beauty is eternal. It appeals to all those who value fine craftsmanship and understated elegance.