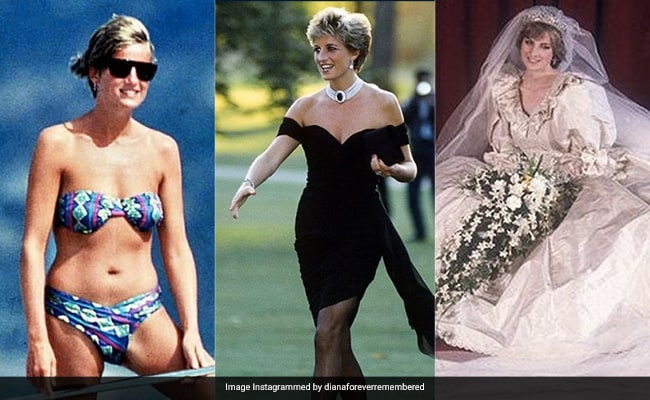 We look at the many times Princess Diana broke fashion protocols

Princess Diana was and is one of the most beautiful women to have walked on planet Earth. Whether we scooped out some of her most gorgeous holiday pictures or red carpet appearances or lest we forget her magnificent wedding look, we couldn't pick a flaw. She lived a life full of controversies but ones we'll forever remember. Princess Diana was famous for breaking royal protocol for many things and her fashion was no stranger to it. She was often termed a fashion icon with her statement-making styles and even more than two decades later, she is remembered for it all. She had a versatile sense of style and often breached royal protocol true to her rebellious nature. The most photographed woman of her time, it is no surprise that we found some instances of when she stylishly defied royal norms to carve a niche for herself only for it to go down in history.

She isn't termed as the 'rebellious royal' for nothing!

Black is formally worn for mourning in Western culture and the royal women follow this too. Princess Diana however donned gorgeous black outfits ever-so-often obviously never without criticism though. One of her most iconic looks of all times was a black off-shoulder velvet gown for her White House visit. Yes, the same event she was seen jiving with John Travolta.

Her famous velvet gown from the White House visit was just a premise to what was to come next. Not only did she pick black but her off-shoulder dress too made quite the headlines. Royal women never picked off-shoulder dresses for their "indecent" style but Princess Diana was different. Perhaps her most famous and the earliest look she donned was her lavender taffeta off-shoulder gown.

Speaking of "indecent", it was no surprise that the royals believed low-neckline outfits were a complete no-no too. Princess Diana however never cared about a cleavage-baring outfit at all. She donned one many times and even introduced what was called "cleavage bags" that covered her chest avoiding any royal fashion faux-pas. One of our favourite dresses till date was her iconic "revenge dress" that she wore for her first public appearance after Prince Charles tell-all announcement of his infidelity.

Hats have been an essential piece of clothing in the royal wardrobe from an ancient practice that women must cover their hair. We've seen the queen don many colourful hats in the past with her monochrome outfits. Of course Princess Diana gave hats a miss; how else would she have donned her edgy yet iconic hairstyle then?

5. Giving Gloves A Miss Too!

Wearing gloves have been a long-drawn tradition for the royals obviously until Princess Diana arrived. Not only was gloves part of royal fashion, it also was a reason to avoid germs. Princess Diana gave this essential a miss as she preferred making contact when meeting and greeting people and even went for formal events without it.

It is said that Princess Diana was mandated to wear long skirts and blouses no matter what the weather or how inhospitable the conditions were. Was Princess Diana going to follow this though? Heck, no! She was often pictured running errands in biker shorts and oversized pullovers that have caught many eyes even today (here's looking at you Hailey Bieber).

Royal women have meant to follow certain style decorum even as young girls and were often encouraged to wear dresses and skirts. This remains a tradition even today. So, when Princess Diana was seen sporting androgynous fashion in bowties and tuxedos, the world was certainly split in half. Did that stop her though? Not at all!

Also Read: Why Meghan Markle Is Reminiscent Of Princess Diana

Princess Diana came a long way in terms of her style all the way from her conservative engagement outfit to her future looks much later. She went from shy to sassy with her dresses and never shied away from shorter hem lengths. In fact, one of the first royal dressing norms inculcated into non-royal women was this. It was not too long after when people started noticing her love for shorter dresses and for that we absolutely love her!

By now you have probably come to understand that anything that revealed an extra inch of skin was forbidden in the royal family. How did she get away with a bikini then? Well, she was Princess Di after all! Even though the royal family is expected to dress a certain way wherever they go, Princess Diana would love her bikinis when she was on holiday. While some disputed that a royal is never on holiday, Princess Di thought otherwise.

Meghan Markle may have made headlines during her engagement announcement by ditching the pantyhose but Princess Diana had challenged this long before. She was often seen barelegged and tanned in public without a worry even at formal appearances.

We left the best for the last; her wedding gown may have stood the test of time but not without a little controversy. Even as she embarked on her new wedded journey, she sparked quite the talk with the fabric used for her wedding dress. Royals are often mandated to wear heavier fabrics that wouldn't crumple easily. Princess Diana loved her silks and linens and didn't stop for anybody.