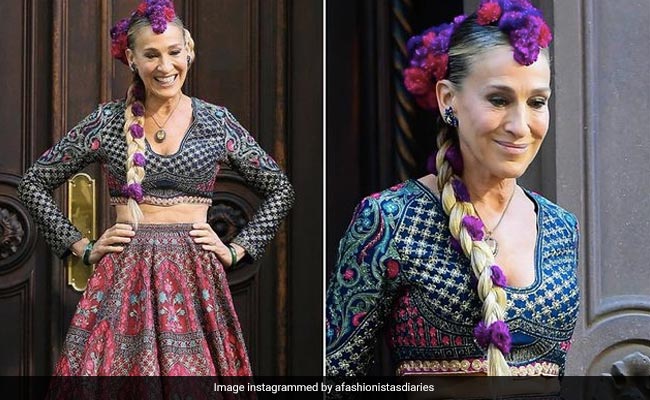 Boho chic dreams are certainly made of this!

It is officially lehenga season and one can easily find anyone and everyone twirling in it. But we spotted a certain someone and our imagination was certainly not as far-fetched to expect this particular celebrity in one. Not Bollywood, but Hollywood's very own Carrie Bradshaw took some time off from writing and strutted the streets of New York in a lehenga by designer duo Falguni Shane Peacock. Whether it is a wedding she is headed to or a casual cuppa Joe, Sarah Jessica Parker stepped out in true Carrie-style. Her contrasting lehenga was completed with floral hair accessories and a velvet potli and ditched the dupatta for some eclectic style moment.

Falguni Shane Peacock may be the one of the country's leading couturiers but their effect is felt far and wide. We're sure it was a pinch me moment for the designer duo when they created a stellar piece of art in its own right for the queen of pop, Beyonce, in a metallic gown ending in yards of gold fabric pooled around her feet and a trail that had a life of its own when she walked the red carpet of the Wearable Art Gala. An art piece she most certainly was!

Among the likes of Beyonce and Lady Gaga, Kim Kardashian is just one of the names Falguni Shane Peacock have dressed up in their illustrious career. Kim Kardashian was dressed in a peplum dress that exuded drama from every inch of its being only to add yet another feather to the Peacocks' long trailing name.

Is Sarah Jessica Parker headed to an Indian wedding in the new Sex And The City? We hope so!