We can always get behind a traditional ethnic look, especially when Sonam Kapoor and Anand Ahuja make it look this majestic 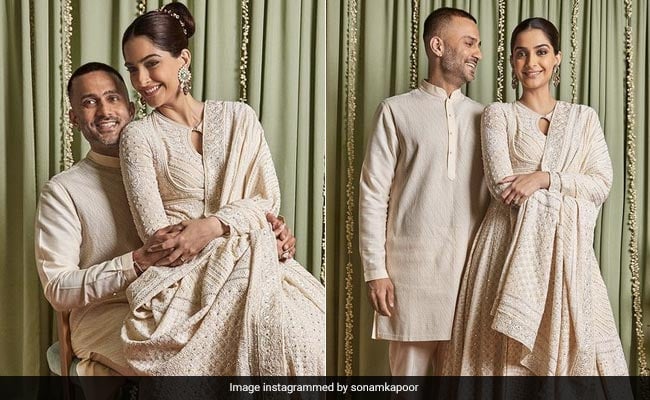 Sonam and Anand in their looks (Image Credit: Sonam Kapoor)

The Diwali 2021 weekend feels like nothing less than a blur. Along with the wonderful memories that we'll keep in our hearts, there's also the amazing celebrity fashion that we'll be taking with us into the advent of the holiday season. While plenty of stars went the trendy route with punchy prints and bright colours, a fashionista like Sonam Kapoor could only take the classic route. With equally stylish entrepreneur husband Anand Ahuja by her side, the celebrity couple cut a stunning picture for Diwali 2021 that deserves a spot on the wall. Sonam wore an ivory Abu Jani Sandeep Khosla salwar kameez set with her hair in a bun and dangling earrings to add a glint. Anand twinned with her while wearing a Rajesh Pratap Singh kurta and pajama set with brown brogues. We can always get behind a traditional ethnic look, especially when Sonam Kapoor and Anand Ahuja make it look this majestic.

It seems like they have a penchant for leaving us stunned with their ethnic looks. For her sister Rhea Kapoor's wedding, Sonam looked resplendent in a pink and green salwar kameez suit with heavy jewellery of a maang tikka, necklace and earrings. Anand picked a grey and blue kurta with white pajamas and did they make for a dashing couple!

They also do manage to give ethnic looks a modern twist with Sonam wearing her sheer blouse with traditional neckpieces and a graphic eye makeup look. Anand chose a black suit with a blue shirt for a dapper look.